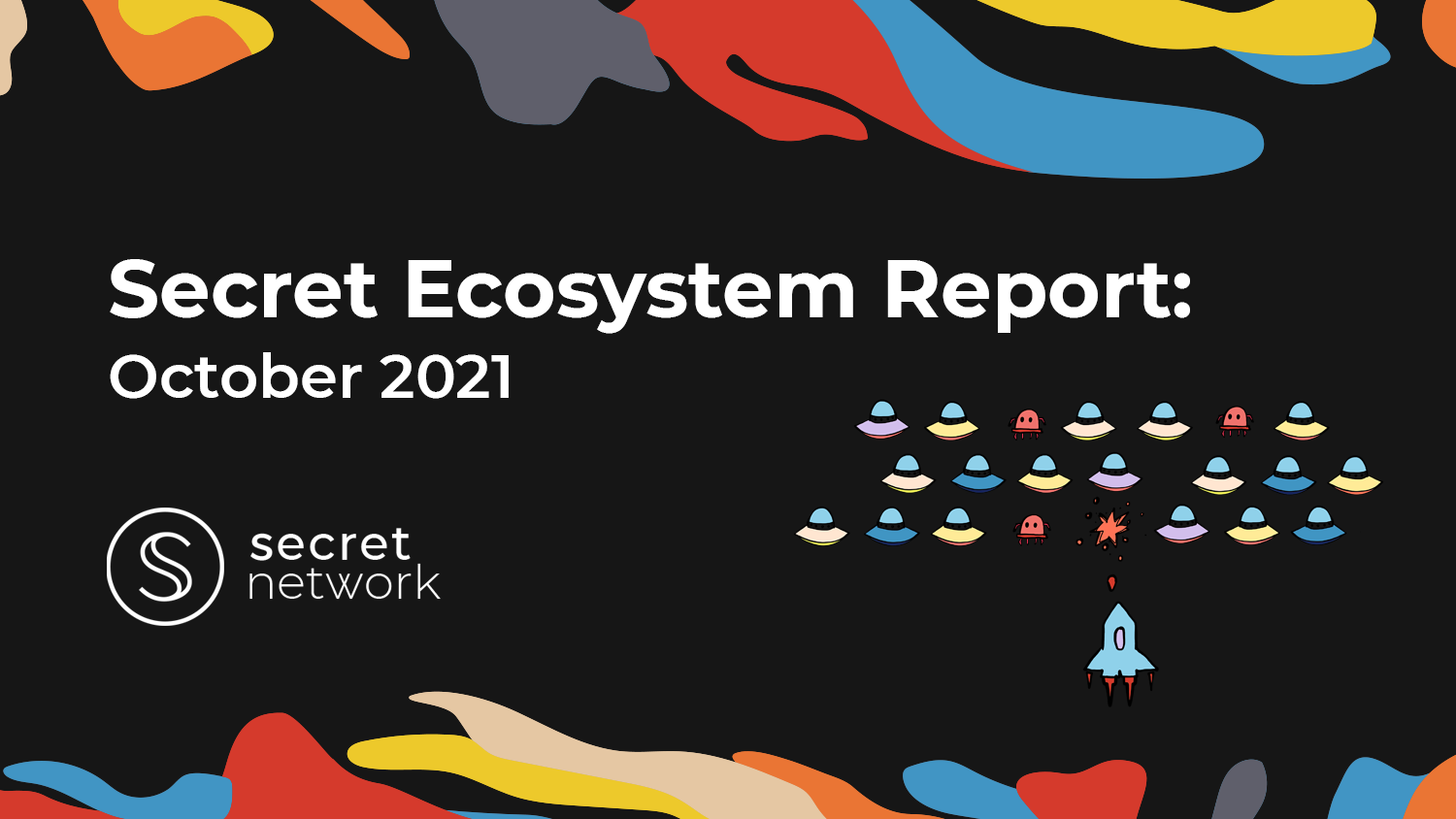 October saw the most new application launches in Secret Network history, with more Secret Apps on the way after Supernova in November. With IBC integration imminent, Secret Network will now be bringing programmable privacy to Cosmos, with novel applications that were never possible before. See what’s been done lately on Secret Network, and how you can get involved!

Secret Network, the first Layer-1 blockchain with privacy-by-default for applications, in October announced they are opening the doors of its ecosystem to artists, developers and other creatives to build Secret NFTs, the first NFTs with built-in privacy and access control features. To kick things off, Secret Network partnered with OpenSea, the world's largest NFT marketplace, and a world-renowned artist and creator to auction seven unique NFTs as part of a single collection in November.

Curious who the NFT creator is? Click here to learn about the Secret we revealed in early November!

The first NFTs of their kind, the Secret NFTs featured in this upcoming auction will offer buyers exclusive content viewable only to the holder - and that has also never been seen previously by anyone but its creator. This first auction of Secret NFTs will be followed by a second, larger collection, that will be available for purchase and mint to a general audience. Starting today, interested parties can register for whitelist consideration for these Secret NFTs.

"OpenSea is excited to partner with Secret NFTs to help artists provide a multi-tiered experience for their collectors," explained Alexander Bercow, Art Partnerships Manager at OpenSea. "Private NFTs offer a new type of solution to all kinds of creators, and we're excited to move the ecosystem forward together."

The Sienna platform is controlled by SIENNA, the governance token, which is earned by using the Sienna platform via liquidity mining and other initiatives over time, creating a fair distribution for a perfect decentralized future, where SIENNA token holders decide over the entire platform.

SiennaSwap has the following properties and opportunities:

Duplex is a new application offering unprecedented yield on stablecoins by introducing a game-changing double-layer strategy that outperforms any other product in the market. Stablecoins are on the rise with 10X market growth in the past year ($100B+) and growing allocation in investor’s portfolios. Despite their solid utility and mass adoption, It’s increasingly difficult to find high yield investment products for stablecoins.

Duplex was developed in order to harness the full potential of stablecoins, introducing a game-changing two layer strategy that outperforms any other stablecoin investment product in the market. The innovation of Duplex’s strategy is the ability to utilize a single invested asset to generate yield from two distinct sources on two distinct networks by connecting to keyTango: a Web3-based investment solution that functions as a gateway for DeFi products and services. It is connected with multiple projects on a variety of DeFi markets, giving users a wide selection of financial tools to choose from if they are looking for ways to maximize the capacity of their assets in making a profit.

The Secret Analytics team has just updated to v3, bringing new functionality and stability to some critical Secret tooling.

Check out the new and improved Secret Analytics:

With the latest update, everyone has more direct access to data on activity in Secret Network, including some of the largest applications on it. This includes: staking, DEXes, the Secret Ethereum Bridge, Secret BSC bridge, large contracts that represent individual Secret Apps (such as Secret Heroes), and SNIP contracts (such as sSCRT).

Secret Analytics has long given valuable insights into Secret Network and the various contracts, applications, and bridges created for it. With the recent on-chain proposal passage of the Data Committee, Secret Analytics will continue to see UX/UI and performance improvements!

The true secret to Secret Network's success has always been its community. We are thrilled to announce major updates to Secret Agents, a growth-focused program designed and executed by the Secret community itself. Read on to learn why we need you - and why now is the perfect time for you to join!

We're on the cusp of a massive revolution, as blockchain technology is set to help usher in the era of Web 3.0, democratizing access and ownership for users around the world. Unfortunately, it has one big flaw: blockchains are public by default. All data on the chain is exposed for all to see, creating security risks, limiting usability, and making it difficult to achieve this vision of empowerment. Secret Network aims to change this by serving as a cross-chain privacy platform for Web 3.0.

To help us defend the privacy of the decentralized web, the network is actively recruiting Secret Agents. You'll execute missions, earn rewards, and become a core part of our long-standing global community of privacy pioneers, artists, developers, entrepreneurs, and evangelists. We can't wait for you to meet your fellow Agents - and they're excited to have your help!

Shade Protocol is an array of connected privacy-preserving dApps built on Secret Network. This series of applications will fundamentally iterate on DeFi by not only innovating on privacy, but also the underlying DeFi mechanics.

Built on Secret Network, and made possible via the SNIP-20 private and fungible token standard, Silk maintains transactional privacy for all token holders of Silk. Key to Silk is that it functions as a medium of exchange, is a store of value, is a unit of account, and is a standard of deferred payment - all of which give Silk the four key fundamental properties of money.

Features of Silk include:

Silk is algorithmically stabilized by Shade - the governance token of both Silk and Shade Protocol. Silk replaces the payments value chain (credit card networks, banks, payment gateways) with a single application-layer protocol. Shade Protocol and Silk are credibly neutral, distributed, and have transactional privacy by default. Important for compliance and transparency is that Silk and Shade transactions can be decrypted with a viewing key or viewing permit unique to the address owner of the Silk, which empowers users to be transparent by choice.

Additionally, users have the option to share data with trusted necessary entities that need an audit trail of transactions.

Secured by Secret Network, Stashh is the first full-stack marketplace and platform for NFTs with native privacy, allowing creators, collectors, and consumers to truly benefit from and control the Web3 digital economy.

Using privacy-first NFTs, creators can monetize their content and protect their IP, while giving consumers trustless control over how they buy, display, use, and trade their NFTs. Privacy-first NFTs can also contain public metadata which is known to all parties as well as private metadata known only to certain parties (such as the owner or creator). Finally, NFT owners have the choice of whether to reveal their ownership of an NFT or not, giving users more security and control.

Stashh will support minting of new collections as well as imported collections of NFTs, such as ANONs (the first PFP project on Secret Network). Users can then buy and sell their Secret NFTs for any supported secret token (such as sSCRT). You can also create a single listing to sell multiple copies of the same NFT, which will have serial numbers, that only get minted when someone buys one instead of having to pay gas to mint a bunch first and sell individually!

Anons are the first private by default NFT collection, built on Secret Network. Anons also features an exclusive chat.  Using Secret Network's private metadata, ownership will grant exclusive access to a Proof of Anon chat. Finally, secondary sales of Anons support charity and organizations focused on privacy advocacy. Each Anon is a unique piece of art in a 580 collection highlighting the artist's style. The Anon drop increased network demand to record levels, and all 580 Anons have been minted!

If you would like to buy an Anon, stay tuned for their secondary market listing on Stashh in November!

Check out the Anons gallery:

Secret Dogs were revealed in October and will be the first ever Secret NFTs collection to mint on Stashh.

Secret Dogs are very loyal. They only show themselves and their personalities to their respective owners upon purchase of the secret NFT.

SCRT Labs revealed their work on new privacy features for Secret DeFi! SecretSwap Anon edition is an alpha version of SecretSwap that would include the following features (Proof of Concept on Github):

(3) Users must use a fresh account for each swap

In October, SCRT was listed on WazirX (SCRT/USDT) and had new pairs added to Binance (SCRT/BUSD). Secret was part of the WazirX's Rapid Listing Initiative, using deposits to WazirX via Binance. Additionally, $SEFI from SecretSwap was listed on ApeSwap on BSC.

In October, more work was revealed on Secret Staking Derivatives!

dSCRT is a staking derivative for the Secret Network. The purpose is to provide a liquid, fungible token for a user, representing his stake in the network. This token will accrue value, in a similar fashion to PoS staking which will unlock farming, and yield compounding opportunities. The goal is not to optimize APYs for users, but rather:

Query Permits are a way to do authenticated queries without needing to set a viewing key first. Created by Assaf of SCRT Labs, check out this innovation that is already drastically improving the Secret Network end user experience!

Secret Network is sponsoring HackAtom VI 2021 in November. Stay tuned for what amazing applications will be made! If you are a developer, be sure to check out and apply to be part of the hackathon.

NFTs on Terra are exploding. For NFTs and the Web3 to really be adopted and drive UST demand, there must be more tools, infrastructure, utility, and other builds that make it easier for artists, communities, protocols, etc to engage with the space. NFTerra is a Terra NFT hackathon focused on bringing fresh ideas and talent into the Terra space to build NFT solutions for a web3 future. Specifically, Secret Network will be encouraging use of the Secret Network tech stack to bring privacy to NFTs!

In this episode of the Unstoppable Podcast, Tor Bair (founder of Secret Foundation) covers what Secret Network is. In this interview, they talk about privacy and blockchains in general, and Tor tells the audience how he developed an interest in privacy and how the idea of Secret was born. Finally, there is a discussion on some of the privacy issues facing blockchains today and the potential solutions for them.

Tor Bair, Founder and CEO of the Secret Foundation, joins the show to talk about his history with Enigma, Secret NFTs, and the incredible future ahead of the Secret Network!

Eric flips to the other side of the interview table, as he answers questions as the SecretSwap Committee Co-Lead and SEFI Executive.

Reuven joins us for an episode to discuss his love for Secret Network and the Rust programming language. Hear his unique takes on crypto as a whole and learn about some groundbreaking ideas for the network in regards to scalability and memory improvements. Such solutions are what is being used by Shinobi Protocol to make their SCRT - BTC Bridge trustless!

Join us for an episode with the founder behind Buttcoin. From simple beginnings, the team continues to build tools of increasing complexity serving the Secret Network ecosystem.

What a summary! There was almost too much progress to document. But as exciting as October was, November promises to bring even more growth to the Secret ecosystem with the rapid development of more DeFi applications and privacy-preserving Secret Apps - and of course, the explosive power of Supernova.

So what other announcements, collaborations, and roadmaps lie in store? You’ll have to wait and see what secrets November brings…