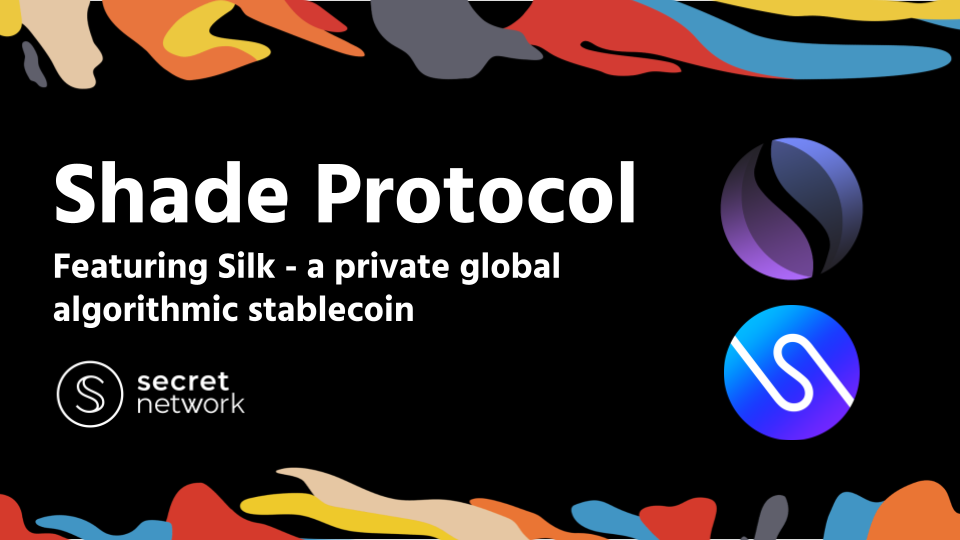 While DeFi (Decentralized Finance) has been innovating at breakneck speed, there's a core component that has been ignored: privacy. As a result:

The solution? Enter Shade Protocol: an array of apps on Secret Network that bring privacy to DeFi.

What is Shade Protocol?

Shade Protocol is an array of connected privacy-preserving dApps built on Secret Network. This series of applications will fundamentally iterate on DeFi by not only innovating on privacy but also the underlying DeFi mechanics.

What is the Silk stablecoin?

Built on Secret Network, and made possible via the SNIP-20 private and fungible token standard, Silk maintains transactional privacy for all token holders of Silk. Key to Silk is that it functions as a medium of exchange, is a store of value, is a unit of account, and is a standard of deferred payment—all of which give Silk the four key fundamental properties of money.

Features of Silk include:

Important for compliance and transparency is that Silk and Shade transactions can be decrypted with a viewing key or viewing permit unique to the address owner of the Silk, which empowers users to be transparent by choice. Additionally, users have the option to share data with trusted necessary entities that need an audit trail of transactions.

Silk maintains its peg with a combination of open-market algorithmic arbitrage, as well as both staking and treasury participation in peg arbitrage. Additionally, Shade Protocol has no block-based inflation, and is pegged to a basket of global currencies and commodities. Finally, Silk has privacy by default, empowering Silk to be a futuristic settlement option for large institutional and retail investors.

Why own the Silk and Shade token?

The following are reasons to own Silk and Shade:

Silk and Shade are aiming to become one of the most liquid pairs to exist on Secret Network, so don’t miss out on this incredible opportunity to be an early adopter!

It has been officially confirmed that there will be a Shade airdrop for SCRT, LUNA, and ATOM stakers, so be sure to get staking as soon as possible. Additionally, information on tokenomic distribution and snapshots will be released in the following weeks.

Get ready and start staking your SCRT today!