Review the latest Ecosystem Roadmap to learn what devs are building on Secret Network - and more importantly, what they will be releasing in the coming weeks! 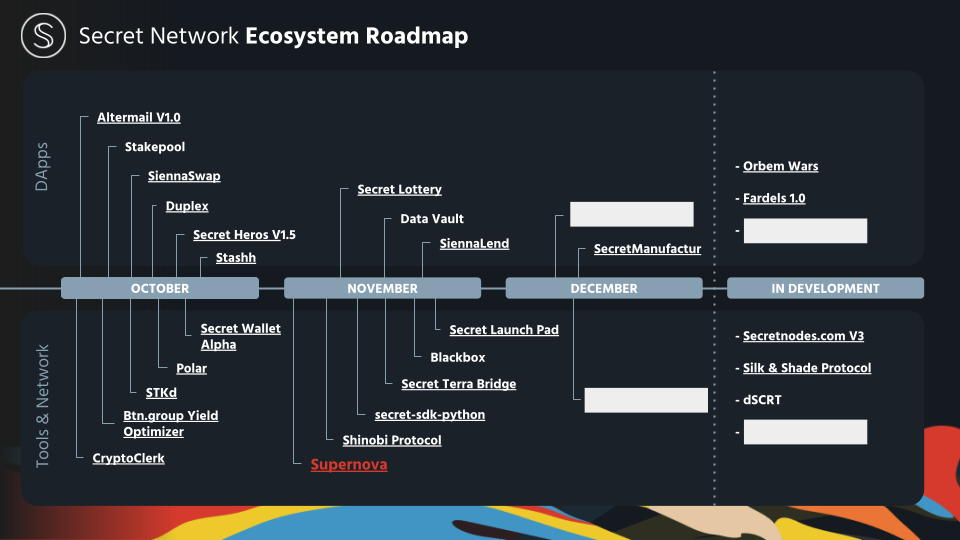 Supernova - our biggest mainnet upgrade since September 2020, bringing integration with IBC - comes closer by the day! We are all very excited about this massive turning point for our ecosystem. However, we shouldn’t let Supernova overshadow all the amazing projects that are already being built on Secret Network - many of which are releasing very soon...

In September, we saw the release of Fardels Beta on mainnet, and although more applications had been scheduled to release in September, some have had to postpone to October. If anything, that little bit of delay is resulting in an action-packed October with many dApps and tools releasing in the coming weeks.

To highlight a few:

Explore the roadmap (pictured above) for yourself, or use this PDF version to learn more about the projects and click through to find further information (if the project provided a URL).

Following the September release of the roadmap, several developers have reached out to share some truly amazing applications and tools they are working on. Most of these secret projects are in their early stages and not ready to make themselves publicly known yet. However, we have been able to connect many of these developers to internal resources that will hopefully accelerate their development.

Are you building something we should know about? If so, we would love to include your projects on the roadmap if it meets the following requirements.

We welcome everyone that is developing on Secret Network and interested in their project being hosted on the roadmap to reach out through this form.

What’s Next for the Roadmap?

The roadmap itself is constantly being improved! As a next step, there will be a dedicated page for the roadmap added to scrt.network. The Secret Network Roadmap will empower anyone to explore the application layer currently in development and get a glimpse of the future. This roadmap will simultaneously serve as a resource for developers and the broader community.

For more information about all of these exciting upcoming products, you can stay tuned to the Secret Blog and our announcement channels (like Twitter). More secrets are being revealed soon…. 🤫

The Secret Network Grant Program is originally funded with 20M $SCRT - currently worth over ~$60,000,000. For simplicity, proposals are split into three categories: Secret Apps, for everything that is directly built on top of Secret Network; Ecosystem, for tools that expand Secret Network and improve general usability; and Network improvements, for major upgrades to the network itself.