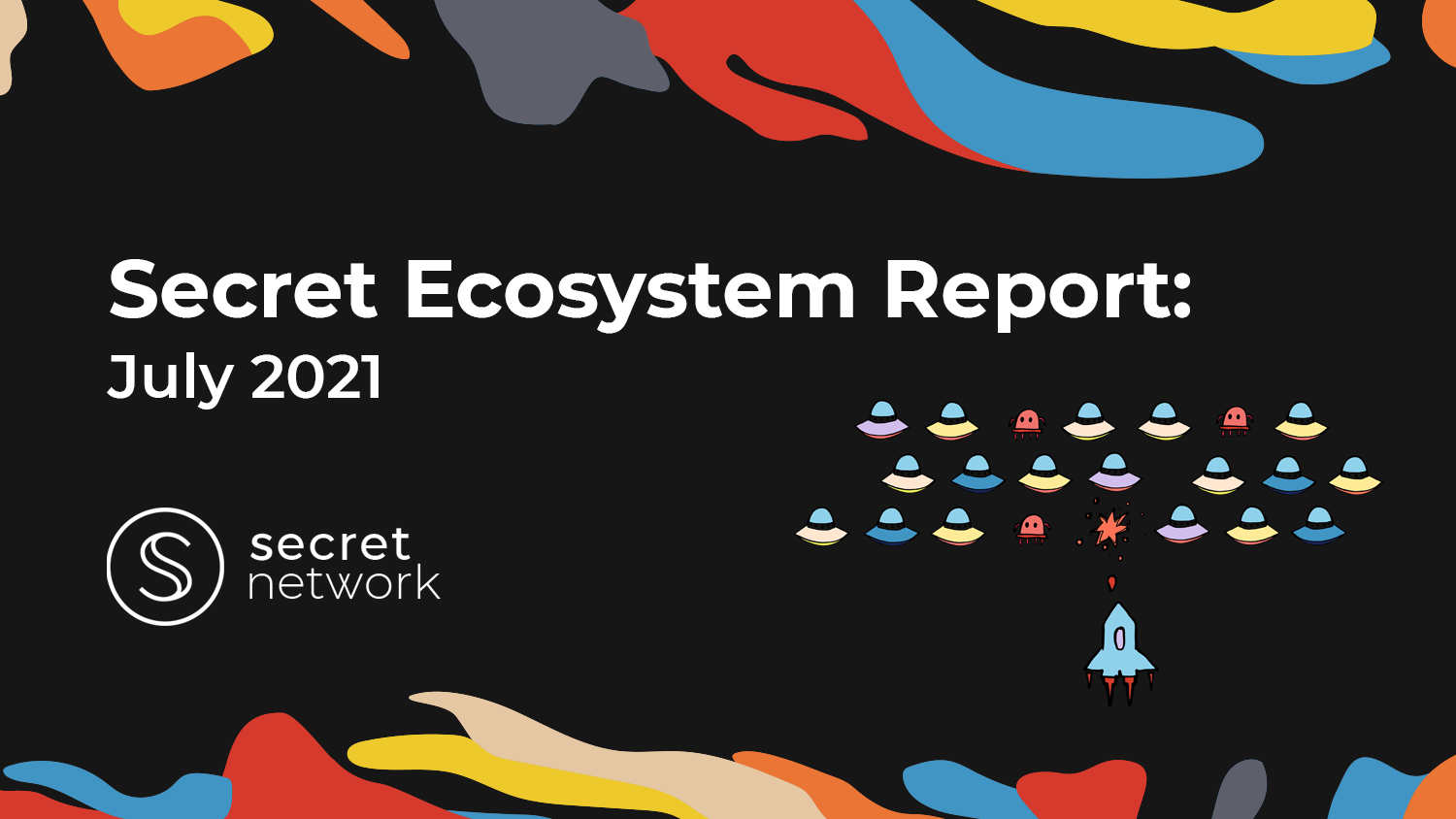 Our push to bring privacy to all public blockchains is increasingly becoming a reality. See what's been done - and how you can get involved!

One of the most requested features in the last several months has been integrating Secret Network with the rest of the Cosmos ecosystem through IBC. The time has finally come as an ecosystem to shift the focus of Secret Network to upgrading our network to the latest Cosmos-SDK version!

The current Secret Network mainnet is based on Cosmos-sdk v0.38. For the IBC Stargate upgrade, Secret Network will be targeting v0.43. This represents a significant leap forward in terms of protocol level improvements and capabilities.

There are three key milestones that will need to be achieved in the process of releasing the next version of Secret Network:

The initial forum post outlining these milestones by the Enigma MPC team can be read here:

Proposal 44 (a signaling upgrade) was submitted by Enigma on July 18th to gather community feedback and voting on whether the IBC initiative was worth pursuing. Proposal 44 passed successfully with resounding community support (over 60,000,000 SCRT voted).

This application introduces on-chain governance for SecretSwap, a front-running resistant cross-chain and privacy-first AMM with over $275M in historical volume. SecretSwap is built on Secret Network, leveraging encrypted "secret" smart contracts to ensure security and privacy. $SEFI is a governance token for Secret DeFi and SecretSwap, and it's also a Secret Token native to Secret Network that provides privacy by default to its holders.

The integration of this functionality into SecretSwap empowers the $SEFI community supporting the Secret DeFi ecosystem to engage with a unique governance system that is private by default, helping secure the integrity and sovereignty of SecretSwap's decentralized governance. Secret voting combined with decentralized governance is uncharted territory. This is a trailblazing opportunity for the Secret DeFi community that the blockchain world will surely be watching.

Only $SEFI stakers need to migrate to the new contract - there is no impact to existing LPs for SecretSwap pools.

Read the full $SEFI Governance blog post and learn how you can get involved and start using SecretSwap today!

With the rapidly expanding development of the application layer of Secret Network, there has emerged a need for better developer tools, including simplifying SecretJS integration with Secret Contracts.

With all the various tools in our community surrounding contract development, there are a million different directions to take front-end and user interface development with Secret Contracts. The lack of a dedicated framework introduces additional complexity when there is a significant amount of possible customization and design direction as it pertains to viewing key management, Keplr interactions, and secret contract queries.

Enter Griptape - the latest recipient of a Secret Grant!

Griptape is built from a popular open-source Javascript framework known as “Vue.js”. At its core, Griptape is an opinionated, web application front-end framework for developing DApps on Secret Network.

To quote one of the core creators of Griptape: “It just makes things easier.”

Best of all, you can start developing with Griptape now!

If you've been waiting to build or deploy your first Secret App, now is the best time to get started.

In episode #1, Iowascero joins the Secret Code Podcast and discusses the SecretSwap committee structure, SecretSwap.io, and the significance of the SEFI governance rollout.

In episode #2, Brendan Kittredge joined the Secret Code Podcast to explain the Secret Agent program, and how to get involved and paid as a community member. In this episode, there is also discussion of a potential launchpad being built on Secret Network (Secret Starter).

If you want to become a Secret Agent recruit and start contributing to the network while receiving rewards as well as exclusive opportunities and access, you can visit agents.scrt.network to learn more!

Fardels is the world's first privacy-preserving decentralized social network built on blockchain for sharing items of small value. Fardels has been in the works for multiple months now - come learn more about the significant progress that is being made to this amazing Secret Application!

Secret Garden is a new community-built tool empowering users to create, manage, and explore Secret Tokens on Secret Network. With options to mint, create,  and burn SNIP-20 tokens with this easy to use Secret Application, what are you waiting for?

In the newest issue of the Terra Project Spotlight, Brian Curran covers Secret Network with a special edition highlighting the partnership between the Tera and Secret ecosystems. Specifically, the joint announcement of the Secret Terra Bridge, a bridge to Secret built on Shuttle (separate from IBC) will enable seamless porting of Terra and Secret assets between the two chains. The bridge is currently on testnet and will unlock cross-chain, programmable privacy for Terra assets on Secret Network.

One of the potential secret contract application is to create a Curve-like AMM on Secret Network. As bridges on Secret Network are multiplying, stablecoin pools such as $DAI $UST $BUSD $USTD $USDC (or even $ETH against $BEP20-ETH) are exciting opportunities to earn safer yields. As such, a Curve like equivalent could garner a significant amount of usage and utilization.

July 1st to August 1st has proved to be the largest month of growth to date for the International Growth Committee. Over the past month, the international communities of Secret Network have seen 50% growth! The largest of these communities being Iran, the Philippines, and Russia at 636, 279, 314 respectively.

With 11 secret agents earning micro-grants representing multiple global communities, the Secret Network International growth metrics are rapidly expanding as a result of these efforts. July itself has seen 751 new telegram members represented between the existing international communities! With a goal of onboarding 14 more global agents (to reach a total of 25) there remains a compelling amount of growth to be had in all of the various telegram communities!

Citadel.One have completed the 3rd milestone of the Secret Network Community Grant by open sourcing all developments!

View the code and read the wiki on the Citadel.One GitHub:

Assaf Morami of Secret Network had the privilege to present on privacy in Cosmos, including: what it entails, why it's important, a brief examination of the application layer, and how Secret Network is playing a key role in Web 3.

Part of an ongoing series of articles and research by Newscrypto.io involves a fundamental analysis report of Secret Network. These research reports are meant to inform the average investor about the potential investment opportunity, as well as a deep analysis of underlying network value and traffic.

"SecretSwap works similarly to Uniswap or SushiSwap but also has privacy features, including resistance to “front-running,” which is a bot attack (or trading) strategy on the Ethereum network in which a bot gets a transaction first in line in the execution queue, right before a known future transaction occurs. The launch of the governance tool means that holders of SecretSwap’s SEFI token can vote in a system that is private by default."
- Benjamin Powers (CoinDesk)

In this both English and Russian interview with СЛЕЗЫ САТОШИ (Slezi Satoshi), Tor Bair of the Secret Foundation discusses Secret Network and the most exciting development in progress. Specifically, the reason behind "Why Secret Network" and "Why Cosmos" are particularly elaborated on in this excellent interview you won't want to miss.

"The partnership is aimed at providing programmable privacy and decentralized finance (DeFi) opportunities for Terra assets. Secret Network (SCRT) announced the partnership via an official blog post. Disclosing that both platforms aim to create opportunities for liquidity providers, their assets, and privacy-focused users." -Rachael Orianele

While articles such as this ideate a world where privacy-preserving computations could solve a range of problems in healthcare and beyond, the amazing news is that Secret Contracts are live and implementable today. Our drive as a community to garner attention surrounding secret contracts continues to grow as the blockchain domain figures out the absolute importance and need for privacy-preserving computations.

Here are a couple of committee highlights:

Awareness committee amplified the launch of SEFI Governance and our collaborations with the Terra community.

What a summary! There was almost too much progress to document. But as exciting as July was, August promises to bring even more growth to the Secret ecosystem with the rapid development of more DeFi applications and privacy-preserving Secret Apps.

With the successful passing of the IBC integration signal proposal, the launch of SEFI governance, and with more amazing Secret Grants on the way, we've seen massive growth in just a short time. So what other announcements and collaborations lie in store? You’ll have to wait and see what secrets August brings…