Introducing a new collaboration between Terra and Secret Network that will provide programmable privacy and DeFi opportunities for Terra assets via the Secret Terra Bridge. 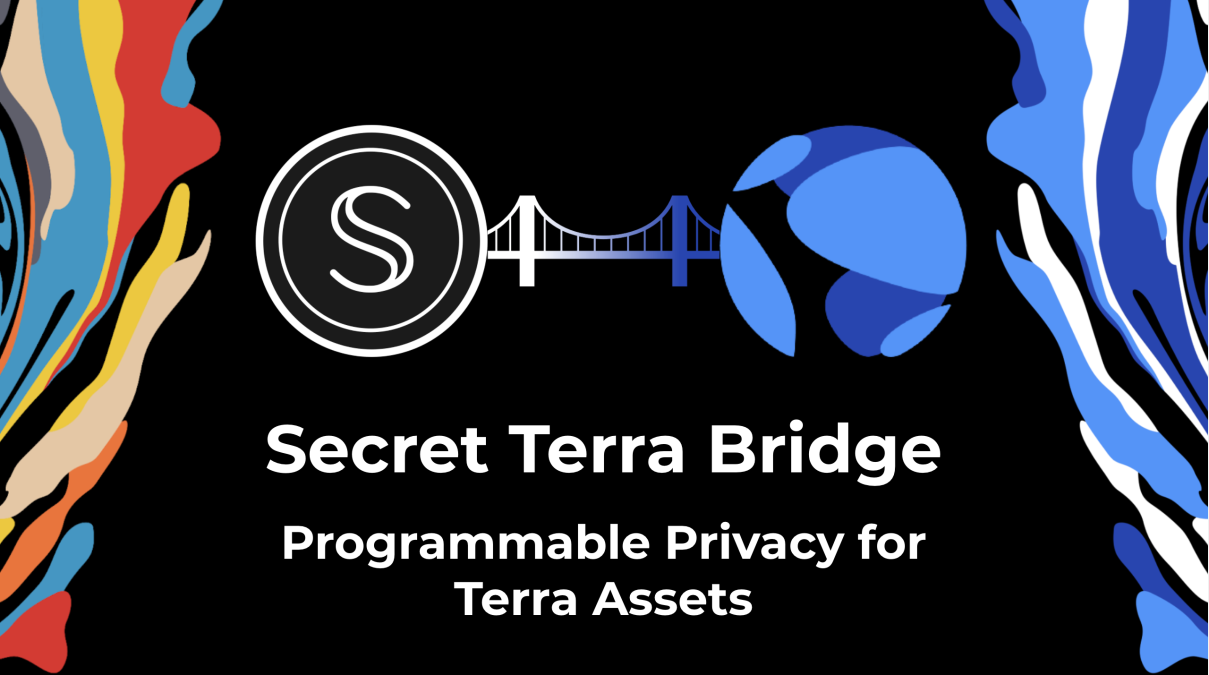 Terra and Secret have long shared a vision for unlocking the true power and value of decentralized finance by empowering communities globally with cutting edge technology in both the privacy and DeFi domain. Both Secret and Terra are built with CosmWasm, smart contracts on both networks use Rust, and both are part of the larger Cosmos ecosystem. It is these commonalities that have led to the current mutually beneficial teamwork between Secret and Terra.

Leveraging our development experience and the strength of our products and ecosystems, we are excited to announce a new collaboration that will create substantial opportunities for liquidity providers, Terra and Secret assets, and privacy focused users. This blog post summarizes the integration of Secret Network with Terra so that both Secret and Terra assets can have cross-chain functionality and interoperability via the Secret Terra Bridge. The bridge is currently implemented on testnet, with our eyes now firmly set on a mainnet deployment!

"We’re extremely excited to see the Terra and Secret ecosystems integrated. This is the first time two Cosmos/WASM chains interoperate on a contract-level. Both teams spent a lot of time into making this happen, and we both agree that connecting Terra’s financial applications with Secret Network’s privacy benefits provides a unique value proposition to users."
- Guy Zyskind, CEO and cofounder, Enigma

"We’re thrilled to expand Terra’s scope to Secret Network, offering our community a valuable avenue to preserve privacy with Terra assets, including private token swaps, UST payments, and more. Secret Network is one of the most compelling projects in the Cosmos ecosystem, and we welcome their community to explore the Terra ecosystem and mutually benefit from what each ecosystem has to offer. Once the Secret Terra Bridge launches and IBC goes live, a torrent of inter-chain DeFi innovation will be unleashed."
- Do Kwon, Co-Founder and CEO, Terraform Labs

The Secret Terra Bridge testnet joins a list of Secret bridges that have been built or are in the process of getting fully launched. Since December 2020, Secret Network has launched multiple bridges on both mainnet and testnet: the Secret Ethereum Bridge, Binance Smart Chain, Monero, and Plasm. Partnering with Terra on the creation of the Secret Terra Bridge will allow holders of certain Terra assets to create "secret," privacy-preserving versions of their assets as Secret Tokens. Secret Tokens are a powerful concept - they're programmable like ERC-20s and usable in applications, but they remain private by default like Monero and similar coins. They can represent any asset, or they can be fully native to Secret Network.

Secret’s initial bridge integration will focus on support for UST and Mirror assets while our teams explore deeper integrations across the Terra and Secret ecosystems. Here's what users can expect initially:

This gives holders of Terra-based assets access to Secret DeFi applications like SecretSwap, helping support Secret Network's role as a hub for privacy-preserving cross-chain swaps. Secret already allows a number of tokens (e.g., ERC-20s from Ethereum, BEP-20s from BSC) to be moved and swapped across chains, and this bridge will give the same access and functionality to Terra-based assets.

According to the respective Secret and Terra teams working on the bridge, testing of the bridge has made excellent progress. The internal testnet of holodeck (Secret testnet) has been successfully connected to tequila-0004 (Terra testnet) for approximately 2 weeks with good stability and no major connectivity issues. Due to Terra's CosmWasm upgrade in mid-July, the teams are preparing to migrate from the tequila testnet to Bombay post CosmWasm upgrade. The public testnet of holodeck connected to Bombay should be ready by early July. After this upgrade, the teams will be able to fully deploy the Secret Terra Bridge to the Columbus-05 Bombay testnet.

In the future, combining the breadth of Terra's ecosystem with Secret's unique privacy capabilities unlocks many potential collaboration avenues across Mirror, Anchor, SecretSwap, and other protocols across our networks. Our development teams look forward to exploring any and all of these possibilities while expanding what's possible for users, traders, LPs, and more!

Terra is an application-specific blockchain in the Cosmos ecosystem deploying a suite of algorithmic, fiat-pegged stablecoins. Terra’s DeFi ecosystem functions as a foundation of demand for the network’s stablecoins, led by TerraUSD (UST). Terra stablecoins maintain their peg parity via a series of arbitrage incentives and a decentralized on-chain oracle system, with the elastic supply of Terra’s native governance and staking token, LUNA, absorbing the short-term volatility of the stablecoin pegs.

One part of Terra's value contributions, payments, in essence replaces the complicated payments value chain, including credit card networks, banks, and payment gateways with a single blockchain layer. In concert with the efficiencies that Terra has provided payment channels for both merchants and consumers, it continues to steadily provide infrastructural improvements and tools for the foundations of laying down a credibly neutral, distributed, and radically transparent ecosystem.

Terra’s ethos of ‘looking outwards’ is reflected by the rapid uptake of its DeFi applications (e.g., Mirror and Anchor) and the adoption of the mainstream CHAI Pay app in South Korea, which has amassed over 2 million active users and relies on Terra’s layer one protocol for settlement without users having to interact with the blockchain at all. Terra’s UST stablecoin is well-positioned to become the premier stablecoin in the Cosmos ecosystem via IBC.

Secret Network is the first ever privacy-enabled Layer 1 blockchain, featuring privacy-preserving smart contracts (“secret contracts”) that utilize hardware-based and software-based privacy technologies to protect data. Secret contracts are unique in that they allow for encrypted inputs, outputs and state. That means all data on Secret Network is private by default, public when desired - a new degree of programmability that unlocks 100x more Web3 use cases. Secret Network is also open-source and permissionless - anyone can operate a node, deploy an app, or contribute to the network and its ecosystem.

Secret Apps on Secret Network have seen significant adoption and innovation, including SecretSwap, Secret Auctions, Secret Heroes, Secret Bridge, and more. All these applications have privacy by default, utilizing the encryption of secret contracts. Secret Network is supported by multiple independent development teams and entities as well as a global community of passionate privacy advocates, including Enigma, Secret Foundation, 45+ mainnet validators, multiple investment funds, and many other developers and community members who contribute to network governance and growth.

As mentioned above, the Secret Terra Bridge is now live on testnet. As our teams move towards a mainnet deployment, soon anyone will be able create Secret Token versions of supported Terra assets, exchange and yield farm with these tokens, and burn them to transfer assets back to the Terra ecosystem.

Thanks for reading to the end! We're excited to finally bring Secret's privacy solutions to the Terra ecosystem and help grow a more secure, more accessible, and more usable global open financial ecosystem. We hope you will join us in our mission of empowering and protecting millions of users around the world.

Use the Secret BSC Bridge: bridge.scrt.network