The world's first private voting application on blockchain, secured by Secret Network, has launched on mainnet! Learn how $SEFI is used to govern SecretSwap and how you can become a part of the Secret DeFi ecosystem. 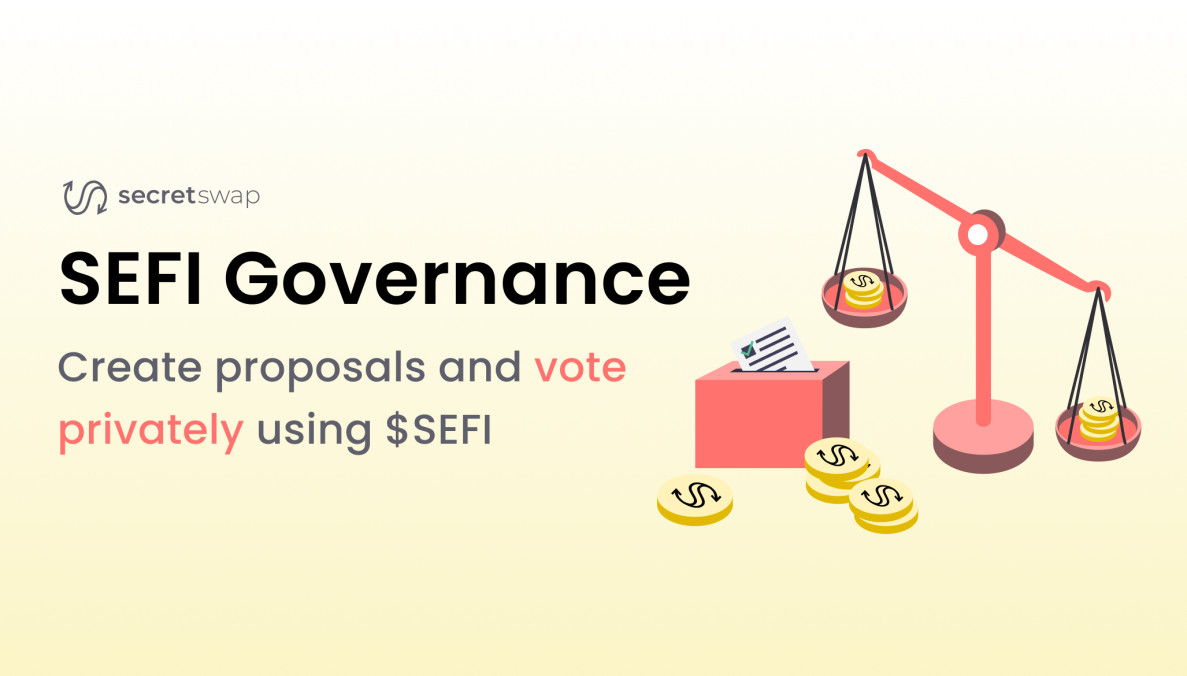 Greetings to the Secret community!

Today we are extremely excited to announce the mainnet launch of the world's first truly private voting application on blockchain, secured by Secret Network - the data privacy platform for Web3.

This application introduces on-chain governance for SecretSwap, a front-running resistant cross-chain and privacy-first AMM with over $275M in historical volume. SecretSwap is built on Secret Network, leveraging its encrypted "secret" smart contracts to ensure security and privacy. $SEFI is a governance token for Secret DeFi and SecretSwap, and it's also a Secret Token native to Secret Network that provides privacy by default to its holders. Now $SEFI holders can directly participate in governance with encrypted voting for SEFI funding and text proposals!

The integration of this functionality into SecretSwap empowers the $SEFI community supporting the Secret DeFi ecosystem to engage with a unique governance system that is private by default, helping secure the integrity and sovereignty of SecretSwap's decentralized governance. Secret voting combined with decentralized governance is uncharted territory. This is a trailblazing opportunity for the Secret DeFi community that the blockchain world will surely be watching.

🚨Please note that if you are currently staking $SEFI, you must migrate this liquidity to the new SEFI pool! 🚨 You won’t be at risk of losing any funds if you don’t migrate, but you must migrate in order to continue earning rewards and to be able to participate in SEFI governance. Read on to learn more!

Details on SEFI Governance and Voting

Proposals for SEFI governance are text-based, similar to proposals on Secret Network at the protocol level. However, a key difference with SEFI governance text proposals is that there are no direct parameter changes to the underlying application code. Instead, successful text proposal changes must be directly implemented by the SecretSwap developer community.

To make a SecretSwap governance text proposal, an address must stake a minimum of 300,000 SEFI. This SEFI staking requirement exists to prevent on-chain proposal spam. However, the specific staking minimum parameter is subject to further change upon a successful governance proposal to change it.

Voting is simple: the more SEFI you have in the SEFI staking pool, the more voting power you have (1:1 ratio). Withdrawing or depositing SEFI after you vote will change the weight of your vote up until the voting deadline upon which your vote is finalized. This fluidity means you can add or withdraw liquidity from the SEFI staking contract while simultaneously participating in governance.

In order to secure the privacy of SecretSwap governance and protect against off-chain attacks, additional steps were added to the voting process. From a user perspective, the most distinct change is the introduction of a “Reveal Committee” which consists of 3 different entities/accounts. Initially, this reveal committee will be composed of Secret Foundation, Enigma, and the SecretSwap Committee, but in the future any group may be able to form a reveal committee.

It is important to note that staking rewards and the respective SecretSwap staking mechanics will remain identical to how they were previously. This was a core component of UX decision-making with the implementation of the SEFI governance module.

Only $SEFI stakers need to migrate to the new contract - there is no impact to existing LPs for SecretSwap pools.

Again, there is no risk of loss of funds for not migrating immediately, and rewards currently accumulated and unclaimed will still be claimable. Users will never be locked out of the ability to claim their accumulated staking rewards on a contract level. Still, it is encouraged to move your SEFI as soon as possible so that you can start engaging with SEFI governance while also earning staking rewards!

SecretSwap continues to rapidly innovate by leveraging the power and encryption of secret contracts. With decentralized governance via Secret Voting now incorporated into SecretSwap, it will be exciting to see how the Secret community governs Secret DeFi going forward!

If you’ve read this far, then you’re probably excited to learn what secrets are coming next. Good news: we're willing to share!

There’s a number of exciting developments in progress for the Secret DeFi ecosystem and beyond, including:

If you want to learn more, you'll have to stay tuned to the Secret Network Twitter or the SecretSwap Twitter over the coming weeks. And you'll definitely want to join the Secret Chat (home of the Secret Agents and our Secret Committees) or keep an eye on the SecretSwap community Telegram!

One thing is certain: privacy in combination with decentralized governance is the key to unlocking the full value of a decentralized future and empowering DeFi users around the world. Thanks for reading - so let’s keep building together!