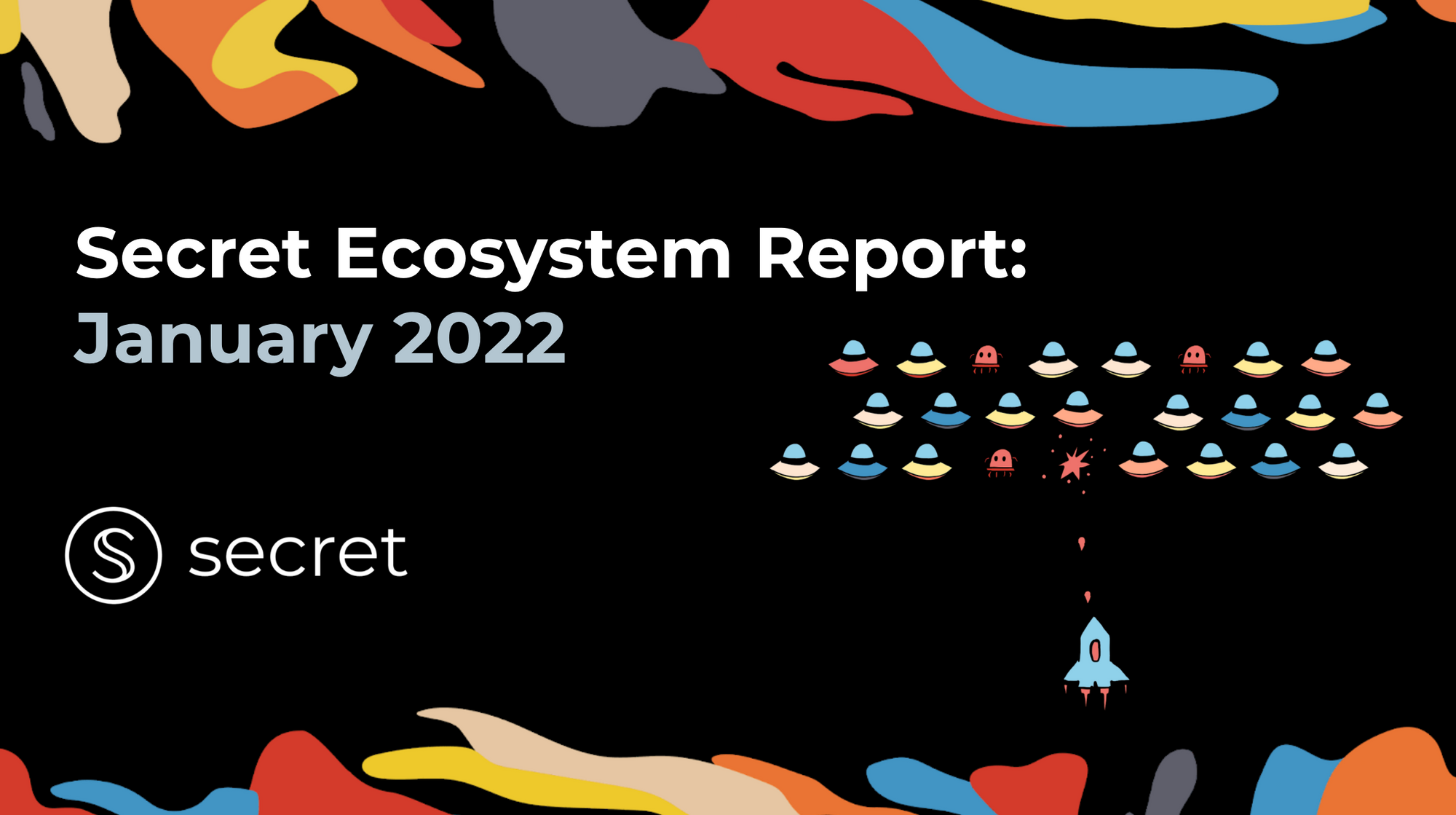 Thanks for being here. Your mission, should you choose to accept it, is to read the following post and learn what has been going down in the Secret ecosystem in January 🤫

January 2022 was a big turning point in history for Secret Network, marking the beginning of the Shockwave growth initiative. Our push to bring privacy to all public blockchains is rapidly becoming reality. See what’s been done lately - and how you can get involved!

The primary focus of Shockwave are the rapid expansion of both adoption and community growth. This takes the form of the following goals for Secret Network in 2022:

Quentin Tarantino, the award-winning director, screenwriter, producer, author, film critic and actor, is making available fan-favorite moments from his original, never-before-seen handwritten screenplay of “Pulp Fiction” along with unique audio commentary by Tarantino. These chapters are immortalized as NFTs on Secret Network, the data privacy platform for Web3.

The winning buyer of the very first chapter, the 'Royale With Cheese' NFT, was @AnonsNFT, who bid $1.1M!

In a new Secret Feature, we revealed our work on Secret Oracles - a giant leap forward for oracle use cases.

Random number generation is crucial for many blockchain applications. It is critical in ensuring fair creation of features for NFTs, outcomes on blockchain-enabled games (eg: loots, card shuffling, die rolling), assignment of tasks in DAOs, and so on. The outcomes have real financial consequences on users, making it critical that their source of randomness is secure and non-gameable. With the ever-growing number of applications and ever-increasing value at stake, it is imperative that a reliable source of randomness is available.

Secret Oracles are a decentralized, trustless source of private randomness achieved by crowd-sourced entropy to produce random numbers which are permisionless in their accessibility by other Secret Network addresses (including other privacy-preserving smart contracts).

Yet another Secret Feature went into depth on Orbem Wars. Orbem Wars is a full blown Tower Defense game with four game modes, set in a distant future in which humankind has ventured into space in search of riches. Driven by your own pursuit of power, you play a mercenary. This four modes are single-player campaign mode, event mode, league mode, and contract mode.

In Orbem Wars, every single turret schematic and turret modification is a Secret NFT. With 15 schematics to fit, each with 3 modifications, a full loadout consists of 60 NFTs. To make sure everybody can get started and has the freedom to experiment with different strategies, the first 2 rarity levels are virtual items on the game server.

Public alpha for Orbem Wars begins in February, so join the community today!

The reveal of the February roadmap update is right in line with the reveal of Shockwave in early January. With more products being funded and built, more creators launching on Secret Network, and more supporters and partners than ever helping to ensure our global growth, the future has never been brighter for Web3 privacy!

After countless hours of hard work, the Secret Network developer community has officially launched Secret Py. Secret Py is a Secret Software Development Kit (SDK) that consists of a simple python library and toolkit for building software that can interact with the Secret blockchain.

In late January, the Griptape team was excited to announce the upcoming Griptape Hackathon. Throughout the month of February, Griptape will be hosting a first of its kind hackathon on Secret Network. Griptape.js is a Javascript / Typescript development framework that sits between the smart contract layer and the traditional Web2 development stack. What this means is that anyone who has built a website with React, Vue, Svelte, or just plain HTML, CSS, Javascript, will be able to seamlessly get a Secret App up and running thanks to Griptape.

All month long developers will be welcome to join the Griptape community to learn about this truly amazing development framework - griptape.js - and compete for the opportunity to win cash prizes. What's more, participants will be building an actual application that will benefit the Secret Ecosystem!

Now, some more updates from the Secret application ecosystem:

SecretSwap is proud to announce its partnership with Alter - the Web 3.0 standard for mailing, messaging, and file sharing with data management is built on Secret Network. The $ALTER token was the first asset listed on the new aggregate rewards governance staking pool on SecretSwap, code name Infinity! Additionally, an ALTER staking pool has been provided for staking and receiving Alter on the SecretSwap platform.

To further clarify the partnership and expand on details of both projects, an AMA was hosted on a YouTube Live AMA on January 11th.

The new aggregate rewards pool includes a 10 day lock-up period. This means unstaking from this pool will take 10 days to complete and for the funds to be released, at which point the user will be able to claim their stake. There will be a “redeem” function that allows a user to initiate the withdrawal process and a separate withdrawal function to remove unlocked disbursements. While $SEFI is staked within the aggregate rewards pool, it will earn $SEFI, governance power for DAO participants, plus assets of new partner projects and additional tokens will be added continually as rewards.

In the world of DeFi, there are countless number of options. Swap on Osmosis? Sienna? SecretSwap? Users are forced to manually check across a variety of DEXs for specific trades, making decisions based on the depth of liquidity. Manually checking is not efficient and does not enable complex trading routes and paths. This opportunity is where sophisticated DEX aggregators algorithms enter the world of DeFi - key tools used for saving money on swaps.

Enter Button Swap - a DEX aggregator built for privacy-preserving DeFi. Button Swap combines liquidity from decentralized protocols SecretSwap and Sienna Network to get you the most lucrative swaps. It’s like 1inch and Auto Swap, but with the added protection from front-running attacks by utilizing Secret Network’s smart contract technology!

In January, Shinobi Protocol deployed its public beta testnet. Shinobi Protocol is a trustless, bidirectional bridge that connects Bitcoin mainnet users directly to Secret Network. With a hash verification system, Shinobi Protocol avoids the traditional direct custodial model by instead being a privacy-secured trustless bridge. With the advent of Shinobi Protocol, it is now possible for Bitcoin holders to have direct access to Secret DeFi in a way that has never been possible before. With Shinobi there is no middleman, and the peg in/out actions communicating with Secret Network are not discernible from ordinary transactions on the Bitcoin blockchain.

In this video, the core contributors to Shade Protocol walked through the architecture of the upcoming February 21st, 2022 multichain airdrop of $SHD which will be given to SCRT, ATOM, and LUNA stakers that were staked during the snapshots that occurred in November and December of 2021. Shade Protocol is an array of connected privacy-preserving DeFi applications build on Secret Network.

SCRT Labs shared its new SCRT delegation policies for 2022, helping incentivize the secret nodes and core contributors working to strengthen the entire Secret Network ecosystem. A month before the end of each quarter, SCRT Labs will publish an interest form for validators to fill out, in which they’d need to explain how they benefit the network and how much delegation they ask for. These interest forms will then be reviewed. The SCRT staking allocation decisions from SCRT Labs are based on merit and concrete contributions to the network.

Some liquidity and availability updates:

On this episode of epicenter.tv, Sunny Aggarwal and Friederike Ernst talk with Guy Zyskind, CEO of SCRT Labs about Secret Network - an open-source data privacy platform built using the Cosmos SDK. Hear how they're using Trusted Execution Environments and SGX technology on the network.

January saw the on-chain renewal of the Secret Network awareness committee, as well as funding for Secret Dreamscape: a SecretNFT card game.

This is just the tip of the iceberg for the Secret ecosystem, which has also seen an explosion in on-chain adoption, NFT usage and issuance, user growth, and more over the past months!

Check out network statistics at: http://secretanalytics.xyz/

The massive progress in January is right in line with the reveal of Shockwave. With more products being funded and built, more creators launching on Secret Network, and more supporters and partners than ever helping to ensure our global growth, the future has never been brighter for Web3 privacy.