In January, Secret Network saw the release of Blackbox, Secret Py, Emergent Properties, and the Secret Invoice Payment System. Read along as we look at what we can expect next! 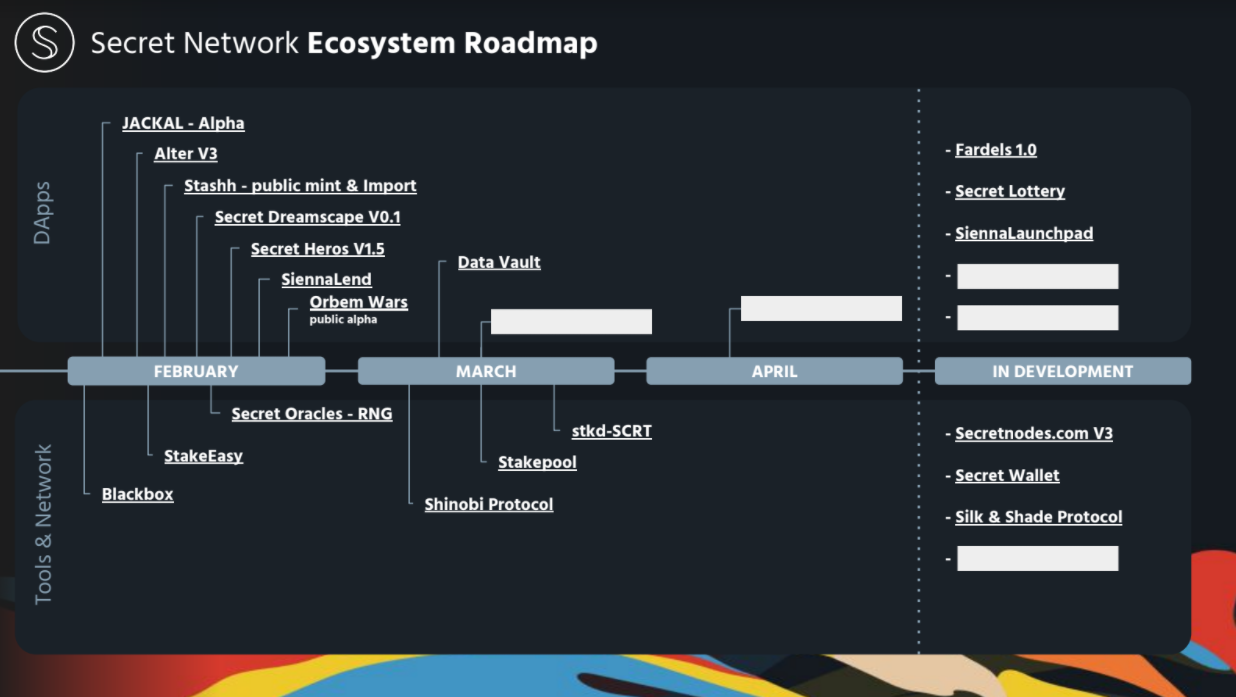 In January, Secret Network saw the launch of three new tools and a Secret App. Early in the month, Emergent Properties launched their unique generative art application. Additionally, the Secret Invoice Payment System was released - allowing users to create on-chain invoice requests to and from wallet addresses. On the tooling side, Secret Network saw the release of a new python SDK with Secret Py. In addition to Secret Py, in early February Blackbox was released - a set of tools that can be used to privately fund a new wallet and privately (without sharing your wallet address) send and receive funds.

Looking ahead to February and beyond, we see that the prior rerence to Secret Launchpad has been removed. Meanwhile, Sienna has revealed their own Sienna Launchpad as announced in the recently released Sienna Roadmap.

Secret Oracles, the first RNG oracle for decentralized trustless random number generation. This could play an important role in many NFT and gaming projects. Read more about it in Secret Feature blog!

StakeEasy, a privacy-preserving liquid staking solution for Secret Network, including features like compounding and derivative tokens to trade your staked $SCRT or use it in DeFi. They expect to launch to mainnet in February.

Orbem Wars is a 3D Tower Defense NFTgame with P2E mechanics. The first of their five phase roll-out (open Alpha test) is scheduled for February.

Several other tools and applications had scheduled to launch in January. For various reasons, some of them had to push their release to February or March. Estimating release dates for ecosystem milestones will always remain a challenge. Still, we continue to work together with developers to ensure the roadmap sets realistic expectations!

Full PDF version of the roadmap, including links

The reveal of the February roadmap update is right in line with the reveal of Shockwave in early January. With more products being funded and built, more creators launching on Secret Network, and more supporters and partners than ever helping to ensure our global growth, the future has never been brighter for Web3 privacy!

Interested in building awesome Secret Applications such as Altermail and Stashh? Perhaps you want to build Secret Bridges or the next generation of Secret NFT applications? If so, there are a variety of options available for developers to get directly involved in building Secret Applications on Secret Network! Read through our latest announcements re: the new $225M Secret Ecosystem Fund, which also contains details on how to connect with the SCRT Labs team and the rest of our developer ecosystem. Additionally, check out Secret Network grants and get started building today!