Throughout the month of February, Griptape will be hosting a first of its kind hackathon on Secret Network. All month long developers will compete for the opportunity to win prizes by using the griptape.js framework on Secret Network! 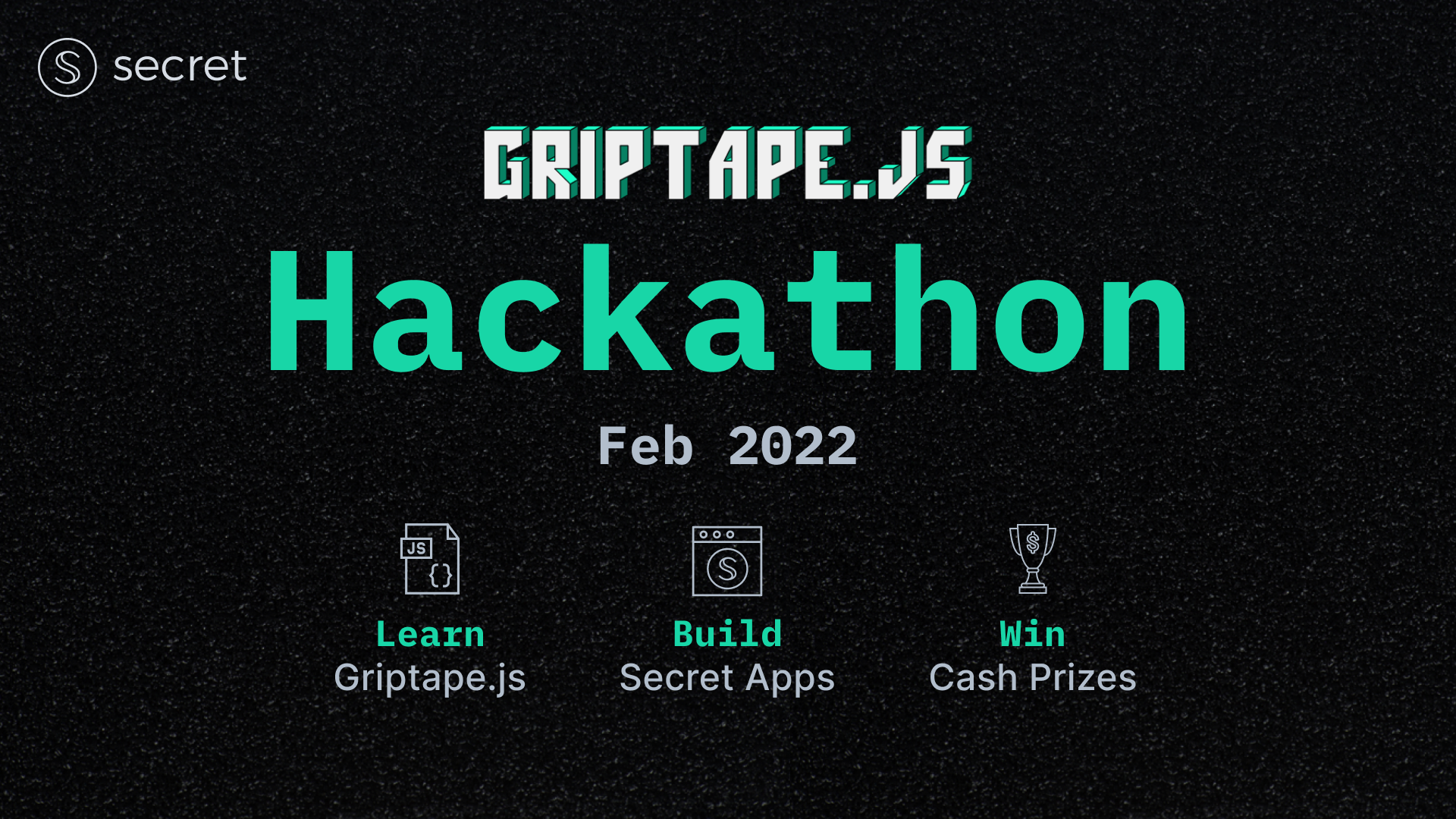 Calling all developers, it's time to hack Griptape.js!

The Griptape team is excited to announce the upcoming Griptape Hackathon. Throughout the month of February, Griptape will be hosting a first of its kind hackathon on Secret Network. All month long developers will be welcome to join the Griptape community to learn about this truly amazing development framework - griptape.js - and compete for the opportunity to win cash prizes. What's more, participants will be building an actual application that will benefit the Secret Ecosystem!

For those of you not familiar, griptape.js is a Javascript / Typescript development framework that sits between the smart contract layer and the traditional Web2 development stack. What this means is that anyone who has built a website with React, Vue, Svelte, or just plain HTML, CSS, Javascript, will be able to seamlessly get a Secret App up and running thanks to Griptape. This is possible because Griptape handles all the tricky aspects of web3 development on Secret Network, and provides an opinionated structure and development methodology that takes the pain out of blockchain.

While developing early dApps on Secret Network, the Griptape team found a lot of patterns and best practices that helped us be way more productive. Eventually, the team realized they had a development framework on their hands, one that bridged web2 dev practices with web3 processes. In skateboarding, grip tape is an essential part of the board. Originally designed just to keep the skater's feet on the board, over time grip tape was leveraged to allow more and more tricks to be performed; the game-changing innovation coming in 1982 when Rodney Mullen introduced the flat ground ollie. He basically used friction and other fun physics to convert forward motion into vertical motion. In a sense he hacked the skateboard's design, using grip tape to get off the ground. The rest is history.

Positioned between the skateboard and the rider's feet, grip tape makes all the modern aspects of skateboarding possible. Similarly, Griptape.js sits between the blockchain and the modern web2 frameworks that every modern developer knows and loves. Although it is possible get off the ground without grip tape, it is really hard and doesn’t make much sense really. Similarly Griptape.js gets you off the ground quickly and easily. You could build without it, but really, what's the point?

This grant provided the funding for the Griptape developers to build out the Griptape framework to where it it is stands today. There are major applications (such as Shade Protocol) in development or production using griptape.js. But beyond the code itself, included in the grant was the idea of a hackathon in which developers would come together and learn griptape.js by building an app that is based on the same contract(s).

And here we are.

In order to make sure we could have a really focused event in which a lot of people could all feel like they are learning the same important things (but in their own way), the team decided the best thing would be to provide a contract, or set of contracts, that everyone would work on together.

For that set of contracts, the Griptape team decided to use the Sealed Bid Auction contracts written by Baedrik way back at the end of 2020. This contract was one of the first deployed on the network and in fact provided the first way for people to trade SNIP-20s on the network. The contract also holds a special place in the Griptape teams hearts as it was the first application Stake or Die built, and it was in the process of building it that the team realized all the unique challenges a front end developer faces on Secret Network. Our solution to those challenges became the first prototype for what would become Griptape JS.

But if you go to https://auctions.scrt.network/ you will notice a glaring issue. It currently doesn't work! The codebase wasn't being actively maintained as the network grew. This month, the team began fixing this problem.

This is now the task in front of us: rebuild the Secret Auctions app from the ground up using Griptape, and have fun doing it!

When is it? The whole of February. All month the Griptape team will be helping out with weekly live coding sessions and extended office hours. Official submissions will be due on Feb 28th, and the prizes awarded on March 3rd.

What can I/we win?

How do you participate?

That’s it, there is more info on the site and on Discord. And there will be more to come.

Can't wait to see you there!

The Griptape hackathon is right in line with the reveal of Shockwave earlier this month. With more products being funded and built, more creators launching on Secret Network, and more supporters and partners than ever helping to ensure our global growth, the future has never been brighter for Web3 privacy.

If you’re a developer, you can also read through our latest announcements re: [the new $225M Secret Ecosystem Fund], which contain details on how to connect with the SCRT Labs team and the rest of our developer ecosystem. Additionally, check out Secret Network grants and get started building today!