September saw the reveal of the Secret Network Ecosystem Roadmap, Messari Mainnet 2021, the announcement of Stashh (Secret NFT platform), the Shinobi Bitcoin Bridge on testnet, the reveal of Shade Protocol / Silk, and so much more! 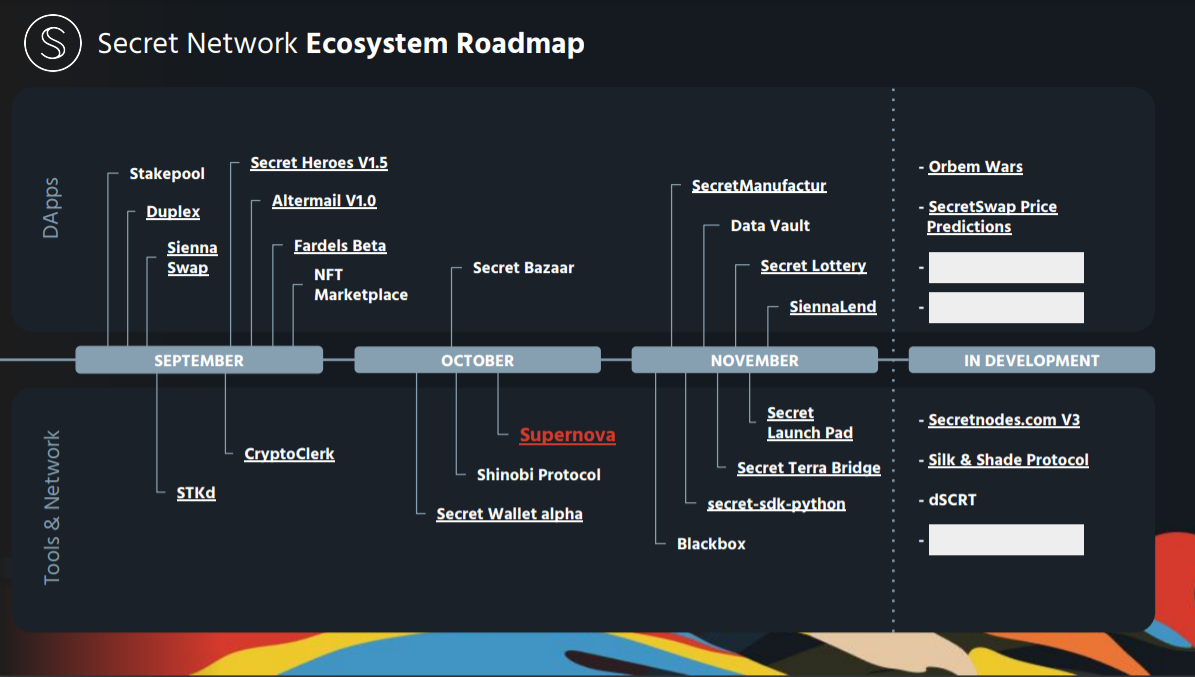 Thanks for being here. Your mission, should you choose to accept it, is to read the following post and learn what has been going down in the Secret ecosystem in September 🤫

September is a unique historical marker for Secret Network - in September of 2020, Secret Network became the first Layer 1 blockchain with privacy-preserving smart contracts. Since then, our push to bring privacy to all public blockchains has become closer to reality. See what’s been done lately - and how you can get involved!

As progress has been made on Milestone #2 of Supernova, here are the following exciting updates from the most recent release logs:

Assaf Morami of Enigma MPC published a prototype implementation for eliminating viewing keys from SNIP-20 & SNIP-721 tokens. Viewing keys are a major hurdle new users encounter when they onboard onto Secret Network, so this should be a huge improvement for the user experience on the network!

NFTs (non-fungible tokens) are a powerful concept, introducing proveable digital scarcity for creative works, in-game items, collectables, financial assets, and more. But up until today, NFTs have had major limitations for creators, collectors, and consumers that prevent NFTs from reaching their full potential as a disruptive technology.

Secured by Secret Network, Stashh is the first full-stack platform for NFTs with native privacy, allowing creators, collectors, and consumers to truly benefit from the Web3 digital economy. Launching in October, Stashh will feature the following:

Using privacy-first NFTs, creators can monetize their content and protect their IP, while giving consumers trustless control over how they buy, display, use, and trade their NFTs. Privacy-first NFTs can also contain public metadata which is known to all parties as well as private metadata known only to certain parties (such as the owner or creator). Finally, NFT owners have the choice of whether to reveal their ownership of an NFT or not, giving users more security and control.

Stashh is currently in Alpha testing. Sign up on the landing page!

Blockchain technology is set to usher in the era of Web 3.0. Unfortunately, it has one big flaw. Almost every blockchain is public by default. All data on the chain is exposed for all to see, making it difficult for this vision to be achieved. Secret Network aims to change this by serving as a cross-chain privacy platform for Web 3.0. To this end, the network is actively recruiting Secret Agents to help in this mission.

Secret Agents work together to build a more decentralized, democratic, and empowering internet with privacy- preserving technologies. Secret Agents achieve this mission by becoming key contributors within Secret Network. They spread awareness about the issue of blockchain privacy and collaborate on projects that help drive network growth and adoption.

As a Secret Agent, you will:

Interested in joining our mission? Become a Secret Agent today!

In September it was announced that Shinobi Protocol has been deployed on testnet. Shinobi is a direct bridge between Bitcoin users and Secret Network, unlocking privacy and Secret DeFi for Bitcoin!

Shinobi Protocol is a trustless, bidirectional bridge that connects Bitcoin mainnet users directly to Secret Network. With a hash verification system, Shinobi Protocol avoids the traditional direct custodial model by instead being a privacy-secured trustless bridge. With the advent of Shinobi Protocol, it is now possible for Bitcoin holders to have direct access to Secret DeFi in a way that has never been possible before. With Shinobi there is no middleman, and the peg in/out actions communicating with Secret Network are not discernible from ordinary transactions on the Bitcoin blockchain.

Shade Protocol is an array of privacy-preserving DeFi applications built on Secret Network. Featuring Silk - a private algorithmic stablecoin. Shade Protocol is actively in development, having received an official ecosystem grant in August.

A private algorithmic stablecoin native to Secret Network will be advantageous for the following reasons:

The first of many developer updates for Shade Protocol was given in September: outlining the current stage of contract development, as well as UI/UX. Milestone #1 of the grant have been completed, with progress being made on milestone #2.

Be sure to check out the Shade Protocol official website.

Ever since the creation of smart contracts, there has been a promise of building new kinds of decentralized social networks. In practice, what has been built have been impoverished clones of existing social networks (for example, EtherTweet) that lack key features, such as the ability to follow others. That is because most smart contract networks do not keep user data private. Plus, they have not innovated around the strengths of the blockchain to rethink the types of relations that the social network aims to foster.

Fardels aims to improve on both counts. By building on Secret Network, important aspects of user data are kept private. And just as Twitter innovated around sharing short pieces of information, Fardels is designed to foster a culture of sharing digital items of small value.

If you’d like to join the global agent program, please reach out to Dalts or JeremySchipper on Telegram. They are the head of the I.G.C., and they can check to see if there is an opening in the current communities!

The Secret Foundation and many Secret Agents were in attendance at Mainnet 2021 - a large blockchain and cryptocurrency conference in New York City that took place during September. Secret Agents had the opportunity to gather and talk about all things privacy, Secret Network, blockchain, decentralization, DeFi, NFTs, and so much more!

Secret Network had a local Chicago meet-up to talk all things Secret Network while enjoying legendary Goose Island Brews. This may become a regularly re-occurring event so be sure to stay tuned for more top Secret community events such as this one!

Get to hear about the ambitious vision of Sienna Network from Monty Munford, the Chief Evangelist himself. We dive into his crypto background and involvement with Sienna. He breaks down his thoughts on the state of crypto and the necessity or privacy. More importantly, he covers how Sienna will help Secret Network and solving this problem.

Learn about Shade Protocol and its stablecoin Silk from the Lead Researcher and Economist himself, Carter Woetzel. He gives a presentation on the underlying features that he believes will propel Silk into the mist of the stablecoin race. Such features include privacy by default and some unique burning/minting mechanisms. Carter explains how the project can also boost Secret Network much higher with the ability to serve as a SCRT supply sink.

Learn about Fardels Network from Ben Adams, the creator himself. His project is a first of its kind social media network built on Secret Network. It has many cool new features only possible because of the privacy preserving smart contracts that Secret offers. Listen in and you will get to learn more about Ben's background and his vision for Fardels!

Join us for an episode to meet Darren, Col-Lead of the Education Committee! He's got a fun story for how he initially got involved and he's got some great takes on crypto education. Find out about the great initiatives that the education committee are pushing forward and how you can get involved.

Join Secret Code Podcast for an episode to meet Arya, one of the lead proposers of the Guerilla Marketing Initiative. He loves cats and Secret Network! If you do too, learn about this grass roots initiative and how to get involved to assist the community's current marketing efforts.

Andy and Rob have a chat with Tor Bair from the Secret Foundation to discuss why privacy is the next phase of Web3 and DeFi, how the Secret Network is best positioned to fulfill user’s demand for a certain level of privacy, and how the Secret Metaverse pushes the composability and privacy of NFTs. All this to truly establish a decentralized and democratic financial system for everyone.

Check out an appearance from Carter Woetzel at Privacy in Cosmos (hosted by ZK Validator) to discuss stablecoins and native privacy!

Proposal 51 passed - a spend proposal that helped fund the Secret Code Podcast to continue production of both the podcast and educational content for Secret Network. Check out the proposal here.

The community has created a Secret Agent Twitter list for any and all Secret Agents that represent the iconic Secret 𝕊 in their their profile description or username. Be sure to add 𝕊 to your profile and join the growing community of Secret Agents on twitter!

What a summary! There was almost too much progress to document. But as exciting as September was, October promises to bring even more growth to the Secret ecosystem with the rapid development of more DeFi applications and privacy-preserving Secret Apps.

With the launch of Supernova on the near horizon, the launch of Fardels and other amazing Secret Applications, we've seen massive growth in just a short time. So what other announcements, collaborations, and roadmaps lie in store? You’ll have to wait and see what secrets October brings…