SecretSwap is LIVE on Mainnet! 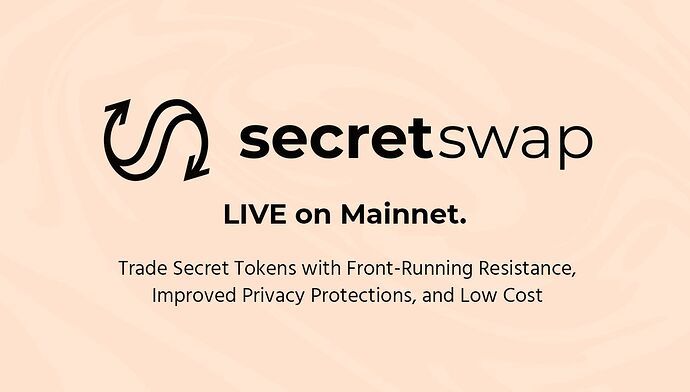 Hello to the community!

Today we are proud to announce the launch of SecretSwap on the Secret Network mainnet - the first AMM (Automated Market Maker) to be launched in our ecosystem and a one-of-a-kind product for the blockchain space. This is a critical piece of Secret DeFi, unlocking new liquidity for secret tokens!

Secret tokens are fungible tokens native to Secret Network that are private by default, and they can represent any native or off-chain asset (including Ethereum assets, thanks to our Secret Ethereum Bridge). On Secret Network, all users benefit from privacy network effects - the more usage there is of Secret Apps, the more security users gain.

SecretSwap allows users to trade any secret token for any other. It works like Uniswap or SushiSwap, but with lower costs and higher user security. For example, because smart contracts on Secret Network have encrypted inputs, outputs, and state, miners are not able to front-run any orders submitted to the AMM. Tokens that users buy on SecretSwap can be transferred with privacy on Secret Network, used in other Secret Apps, or sent over bridges back to native chains (including Ethereum). Network fees for interacting with SecretSwap are paid in SCRT, like all other secret contracts.

As more bridges are built in the Secret ecosystem - including integration of IBC - SecretSwap will become a cross-chain, privacy-first, front-running resistant liquidity hub. And as an early user, you can already begin reaping the rewards of its future growth.

Read on to learn:

You can access SecretSwap (as well as Secret Bridges and Secret Earn) at: https://secretswap.net

That means you can swap secretETH to secretSCRT, secretUSDT to secretETH, and so on. Contribute liquidity to an existing pool or add your own! You can also create pools for native secret tokens (such as FATS!).

Over 1,500 addresses have already used the Secret Ethereum Bridge to create secret token versions of their ETH assets. Over $50M of ETH assets are currently deposited in the bridge and earning yield as part of our bridge mining program. You can be earning APYs on ETH and supported ERC-20s of between 20-30%!

We've previously announced that there will be a native governance token deployed for the Secret DeFi ecosystem (referred to as GOV for the purposes of this blog). More detailed information will be shared next week on how the initial distribution of GOV will be weighted.

As mentioned previously, SecretSwap will first be deployed without the governance token active. This will begin a mainnet testing period for the AMM. The GOV token is expected to be added to SecretSwap before the end of Q1 2021 (with a specific date to be announced in the future). LPs and traders who are active on SecretSwap before the launch of the GOV token are expected to be eligible for the initial distribution based on this activity.

There will be three main ways to earn GOV: launch distribution, rewards for liquidity providers and traders, and rewards for GOV stakers.

The GOV token will initially be distributed on both Ethereum and Secret Network. This also means that GOV will be included to the Secret Network Ethereum bridge and can be moved across the two networks. Initial distribution is expected to be as follows:

What's Next for Secret Network and Secret DeFi?

This is a momentous launch for Secret Network, but it is only yet another beginning. We expect initial liquidity to improve over the coming weeks as new incentives are introduced, the governance token is launched, and new products and bridges are announced.

Revolutionizing decentralized finance and providing unique new features and user protections is a long process. Builders and users together will help Secret DeFi expand to secure more assets and build liquidity and accessibility. Let's continue our collaboration and achieve great things together :)