Today we introduce a complete look at Secret Network’s tokenomics and announce the new Secret Ecosystem Pool - 20M $SCRT committed to the global growth and adoption of Secret. 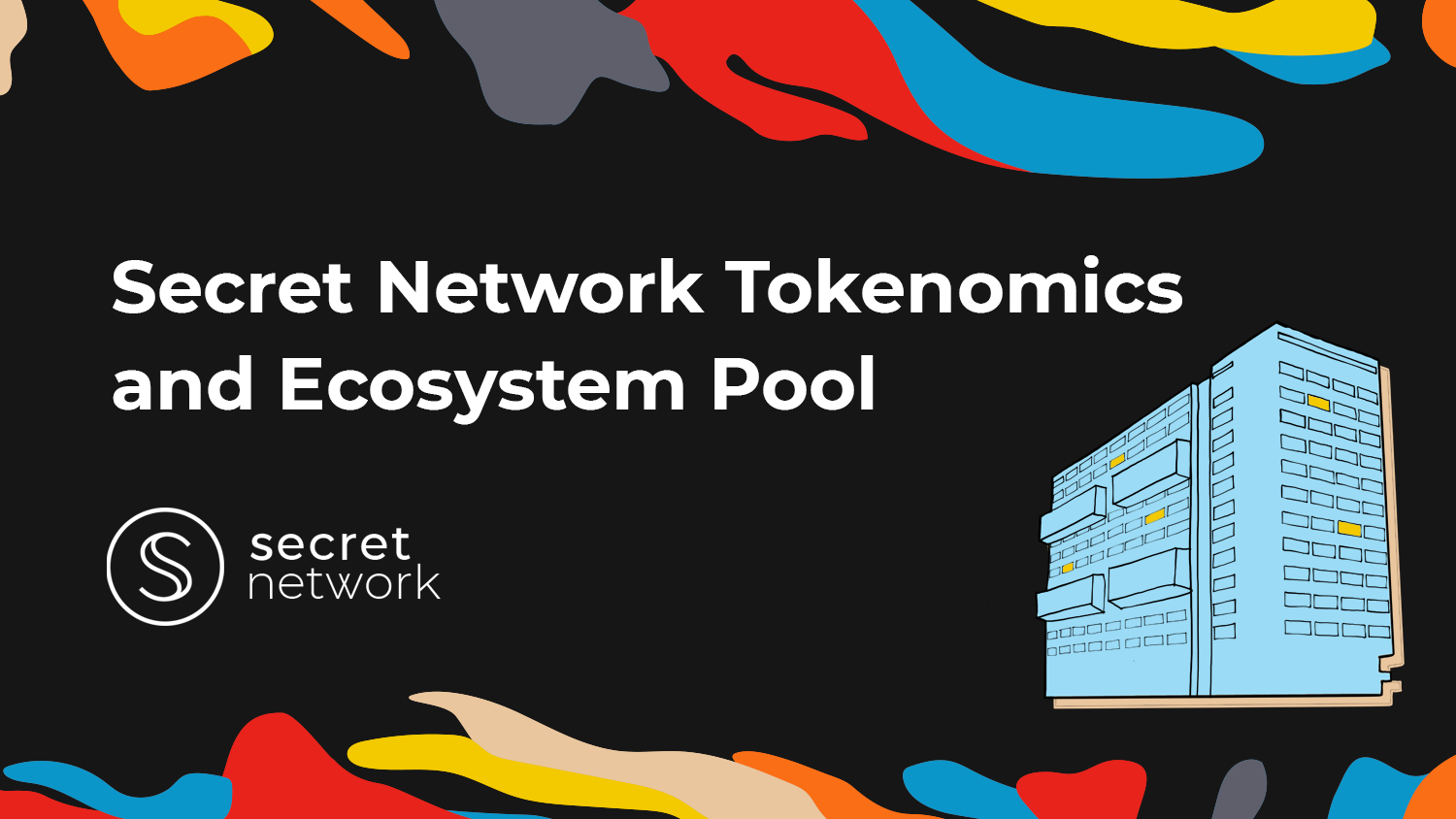 Hello to the Secret Network Community!

One of the issues raised most frequently by the community pertains to a more complete account of SCRT tokenomics. Given Secret Network’s unusual birth as a truly decentralized network from day one, alongside the community-organized swap from ENG to SCRT, this has been more challenging.

However, we all agree that for the network to continue its proper growth, it’s important to give clarity and remove any uncertainty about Secret Network tokenomics. We believe this is now made possible with the apparent upcoming close of the community swap. (Please note that the close of the swap is determined by the community itself. We have assumed for the sake of this post that the swap is indeed ending on Jan 1, 2021, as has been indicated elsewhere.)

Before we get to the actual numbers, it’s important to give some context. As the community supporting Secret Network, our main goals must be growth and sustainability. We must ensure that our tokenomics allow Secret Network to remain competitive with other ecosystems. That means creating a structure that is and remains attractive to developers, node operators, funds, enterprises, and other community members.

Enigma, when considering their intent to swap a portion of treasury ENG tokens, thought deeply about both how many tokens to swap and how to put them to use in ways that benefit the network. The main principles are to ensure the network remains fully decentralized while making sure that Secret Network is well-positioned and resourced for the long run.

A Brief Note on Benchmarks

As part of a quantitative approach, we can look to outside sources and benchmark Secret compared to other successful ecosystems (as measured by their growth, community, and adoption). As a sampling, below is a summary of the token distribution of other well-known ecosystems.

Interpreting these figures, we see that there’s a consistent pattern in which initial “team” members (of all flavors – shareholders, employees, and advisors) retain between 25%-30% of the token reserve. An additional ~28%-48% are reserved for treasury and ecosystem pools. Finally, between ~27%-47% are held broadly by the community.

While there’s quite some variance between these different networks – some provide more control to key stakeholders than others – it’s clear that no single entity owns a majority stake of the tokens. However, for all ecosystems, it is critical to have a large, non-circulating coin reserve that can be deployed as needed in the pursuit of growth and adoption.

Note that these are just a few examples of successful projects with substantial community involvement. There are certainly ecosystems that feature far more centralization, with over 80% of the token reserve retained by a centralized team.

We’ve therefore done our best to estimate final numbers based on what we could account for, including the tokens already swapped by the community and those planned to be swapped by Enigma, as well as inflation since network launch. Accounting for all of these, we get rough estimates of (expected as of January 1, 2021):

There’s quite a bit to unpack here. First, it should be clear that Enigma itself (including all affiliated companies) retains less than 20% of the network. A similar figure is reserved for the team members, which on a percentage is lower than all other benchmarks that were examined. It’s important to note that Team coins include all coins granted to past, present, and future employees and that it spans not just Enigma but other affiliated companies, as well as the Foundation (which employs past Enigma employees). Team coins are normally vested based on personal employment or advisory agreements, which range between 2-4 years.

Second, Community coins account for all tokens the community has swapped, coins held by genesis parties that are not affiliated with Enigma, and the on-chain community pool. While presented separately, the vast majority of tokens earned through inflation also belong to the community, since the majority of staked coins in the network are community-owned.

Third and most importantly for clarity, these numbers already include Enigma’s swap of its own treasury tokens, which amounts to 25M tokens that will be swapped for Enigma’s treasury and team, and an additional 20M that will be swapped and dedicated to an Ecosystem Pool (more on this below). This is the absolute final amount that will ever be swapped by Enigma. Furthermore, any ENG tokens returned in the claims process related to the Enigma ICO will not be swapped, and any SCRT coins returned by ICO participants will be burned. Also note that none of the tokens being swapped by Enigma are entering the circulating supply of SCRT.

Finally, one more comment on how Secret Network tokenomics are expected to evolve over time, given that this is a static snapshot. With current network inflation and the foundation tax (15% of inflation), we expect both the community and foundation's holdings (which are expected to be reinvested in the network’s growth and sustainability) to increase over time at the expense of Enigma, its team, and the Ecosystem Pool.

One of the greatest successes in the Secret ecosystem to date has been the on-chain community pool, which has led to several successful initiatives in its short existence (e.g., Puzzle Explorer, Keplr wallet, Holodeck testnet, and many others). Looking at other major networks, it’s clear that a significant, well-established ecosystem fund could greatly assist with Secret Network’s growth and adoption. Many initiatives, such as development grants and user-acquisition strategies like yield farming campaigns, require such a fund to exist.

For this reason, we’re launching a dedicated Ecosystem Pool that will provide a meaningful source of funding for projects and initiatives being built on Secret Network for years to come. As mentioned above, it will begin with 20M SCRT allocated to fueling Secret Network's growth and securing its sustainability.

The Ecosystem Pool separates itself from the community pool in several ways:

Specifically, here are some of the things we expect the Ecosystem Pool to assist with:

In terms of initial governance, and in the interest of continuing our fast pace of evolution as an ecosystem, the pool will be co-managed by the Secret Foundation and Enigma. We are actively looking for ways to involve more parties in the community in the process of operating the fund. Seeing the success of other network committees, one such option would be to establish a dedicated Ecosystem Pool Committee which would proactively seek worthwhile endeavors or review proposals. We would like to continue a discussion on this initiative on the Secret Forum!

We hope this post gives everyone some needed clarity and that together we can now look ahead to a successful and exciting 2021. With the introduction of the Ecosystem Pool, together with the imminent launch of bridge mining, Secret DeFi products, and much more, the end of 2020 marks a substantial turning point for the Secret ecosystem. It also introduces tremendous new opportunities for developers and community members looking to enter the Secret ecosystem and become key contributors.