Supernova, the biggest update to Secret Network since September 2020, is around the corner. Read about this and other exciting developments in the November Ecosystem Roadmap update! 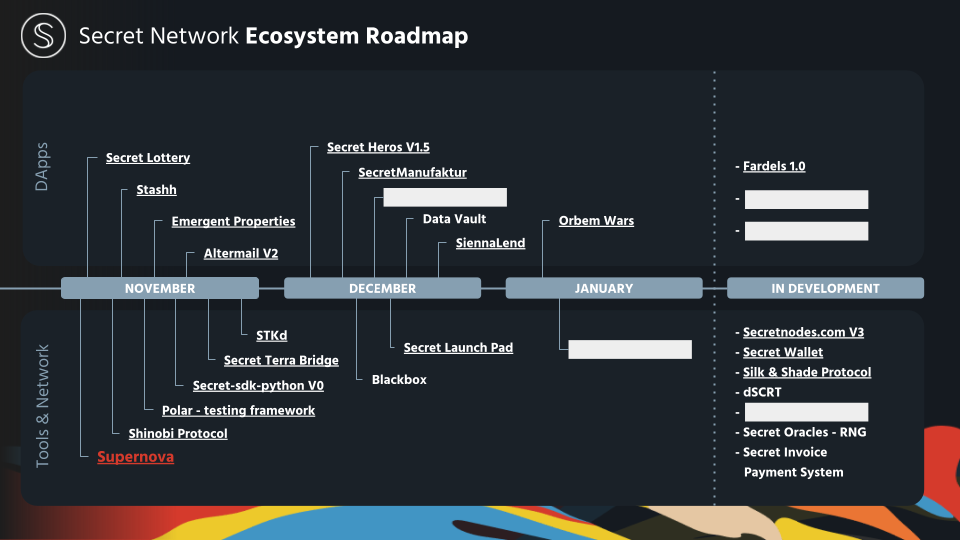 There was so much news in October that you may have missed some of the Secret ecosystem's major releases! We saw the release of Altermail, SiennaSwap, Duplex, Btn.group’s Yield Optimizer, CryptoClerk, and Polar’s initial release - all of which add to the list of pivotal projects that are expanding the Secret Network ecosystem considerably. Now November is set up to be an equally action-packed month.

Supernova - our biggest mainnet upgrade since September 2020, bringing integration with IBC - comes closer by the day! As of November 4th, on-chain proposal for this upgrade is currently in voting. Please cast your vote on Secretnodes or Keplr dashboard now, as the expected upgrade date is scheduled for November 10th, 2021.

Beyond Supernova, the NFT ecosystem on Secret Network is beginning to explode! Stashh is introducing the first NFT marketplace on Secret Network, and will support the NFT craze that we have seen develop over the last couple of weeks (including the surprise announcement of Quentin Tarantino's original NFT collection on Secret). Other ecosystem highlights include..

Additionally, three new projects have been added to the roadmap:

With so many upcoming reveals, we believe all these exciting developments on the network should be shared with as many people as possible. It has been amazing to see the Secret Ecosystem Roadmap pop up in so many Twitter posts and replies, as well as in the various Discord and Telegram channels. Please continue to share!

To reach an even bigger audience, we have launched a new roadmap page on the main SCRT.network website today! This page will also include an embedded form that developers will be able to use to get in contact with us and have their projects featured on the roadmap.

The Secret Network Grant Program helps provide initial funding for developers building critical additions to the ecosystem! For simplicity, proposals are split into three categories: Secret Apps, for everything that is directly built on top of Secret Network; Ecosystem, for tools that expand Secret Network and improve general usability; and Network improvements, for major upgrades to the network itself.

As developers, development companies, and as a community, we will never stop building. There are countless use-cases, unique to Secret Network, left to explore. Keep following the official announcements channels (like Discord and Twitter) and the Secret Blog to stay up-to-date with the latest secrets as they are revealed…🤫