As Stashh, the first SecretNFT marketplace, launched in December, we have seen an explosion in Secret NFT collections. As 2021 has come to an end, we now prepare for the next wave of growth! 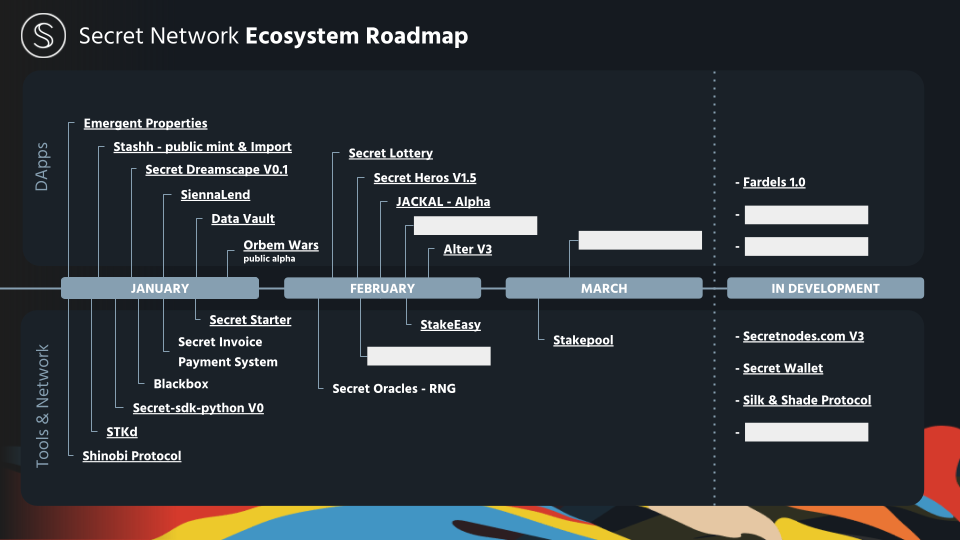 As we all return from time away with friends and family, we wanted to take this opportunity and have the first blog of 2022 look ahead on the wave of growth that is to come. Soon, we'll release blogs that recap the Secret ecosystem achievements of 2021 and share our vision for 2022 and beyond. But for now, let’s recap December and see what Q1 has in store for us all!

In December we saw the highly anticipated Stashh marketplace launch. Since then, Secret Network has seen dozens of Secret NFT collections reveal themselves, many of which are already minting and trading. Meanwhile, Altermail rebranded to Alter and released Alter V2. The Polar team have released their Polar contract testing framework to help Secret App devs. Finally, Emergent Properties shifted their release date over the holidays, and launched on 2nd January.

Looking ahead to the first quarter of 2022, we see three new projects added to the ecosystem roadmap, one old project return (Stakepool), more announcements of project updates (Stashh public mint & import, Alter V3), and some projects that shifted their December target date into 2022. Some highlights of January and February include:

The Roadmap in Review

This is the fifth consecutive month that we release an ecosystem roadmap, so it's the perfect time for time for a review!

Firstly, we want to thank all contributors for their collaboration and transparency. Without the developers, development teams, and development companies behind all these ecosystem projects, the roadmap would be an empty sheet. Overall, developers gladly participate in the roadmap project, appreciate the level of input they have, and appreciate the option to not have to commit to a timeline when they aren’t ready.

On the flip-side, the roadmap has shown how difficult it can be to put a realistic target date on projects. Unforeseen ecosystem changes and dependency on external parties (auditors, e.g.) don’t help. Nonetheless, for the roadmap to hold its value as a resource for the community, we would prefer to see fewer changes in release dates. We will be working together with contributors to make this happen. In fact, changes to our approach have already taken effect in this January roadmap!

As developers, development companies, and as a community, we will never stop building. There are countless use-cases, unique to Secret Network, left to explore. Keep following the official announcements channels (like Discord and Twitter) and the Secret Blog to stay up-to-date with the latest secrets as they are revealed…🤫

The Secret Network Grant Program is originally funded with 20M $SCRT - currently worth over ~$100,000,000. For simplicity, proposals are split into three categories: Secret Apps, for everything that is directly built on top of Secret Network; Ecosystem, for tools that expand Secret Network and improve general usability; and Network improvements, for major upgrades to the network itself.

As individual developers, independent development companies, and as a collective community, we will never stop building privacy-first solutions for Web3. There are countless use-cases unique to Secret Network left to explore.

Ready to join our core community? Become a Secret Agent today, and support our global ecosystem while earning unique rewards and making new connections! We'd love to learn how we can support and build alongside you.