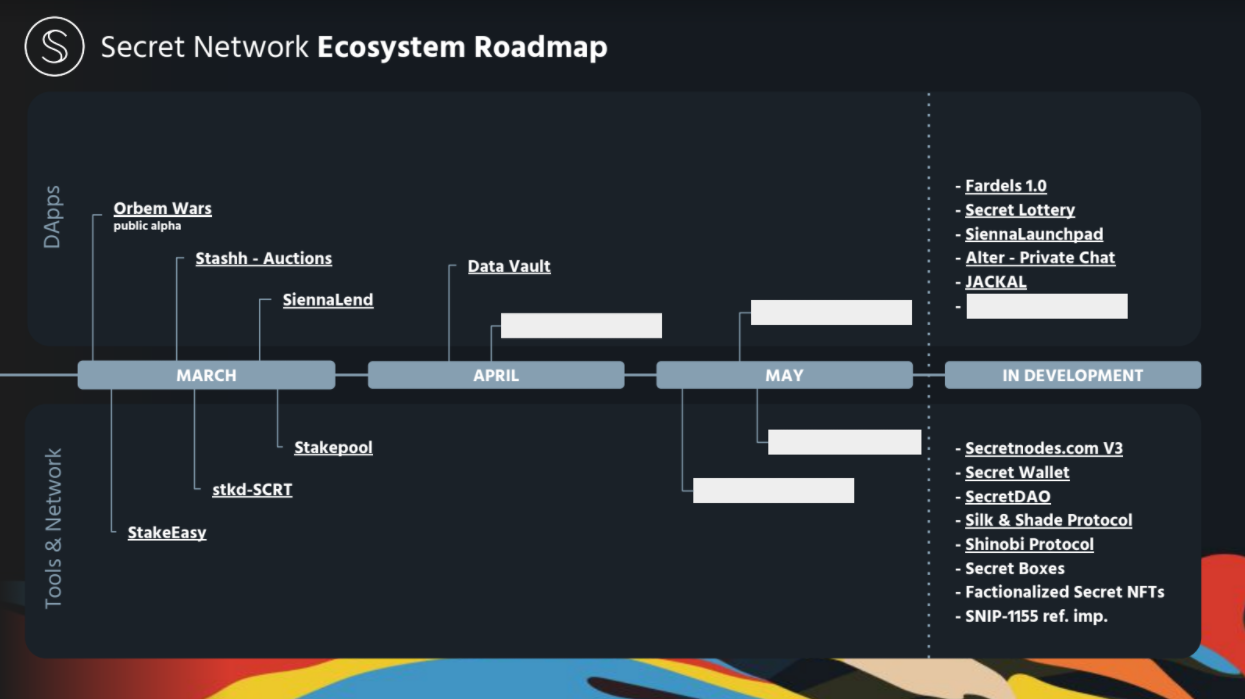 Greetings Secret community! This is the new streamlined Secret Network Ecosystem Roadmap, focusing on applications around the Secret ecosystem that have concrete timelines for new features and launches. In a separate post, we'll focus on some of the roadmap for SCRT Labs specifically (the core developers behind Secret).

Blackbox is a set of tools that can be used to privately fund a new wallet and privately (without sharing your wallet address) send and receive funds. Secret Dreamscape is an on-chain that combines scrabble with poker. Secret Oracle RNG is the first Secret Oracle that provided developers with a true on-chain generated random number. JACKAL combines Secret Network with file storage to offer world-class solutions to protect your most valuable data.

A couple of project highlights to look forward to in March:

StakeEasy is a privacy-preserving liquid staking solution for Secret Network. Including features like compounding and derivative tokens to trade your staked $SCRT or use it in DeFi. They expect to launch to mainnet in February.

Stashh will be releasing their Auction functionality, giving the already very well received marketplace additional features for the SecretNFT community to trade their NFTs.

SiennaLend will be the first lending and borrowing platform on Secret Network, expanding the DeFi products on offer in the network.

Looking ahead to March and beyond, we see that the Secret Network Ecosystem Roadmap has been cleaned up compared to previous versions. The roadmap team is doing the best they can to ensure the information communicated in this updates are as accurate and reliable as possible. For this reason, a few projects have been moved to ‘In Development’ versus actively being placed on the roadmap timeline. This does not mean they will launch after May - it only means that they currently do not have a good estimate of release. Some projects (for example Stashh and Alter) have started to release their own roadmaps to provide more detail.

The release of the February Secret Network Ecosystem Roadmap follows our reveal of Shockwave in early January of 2022. With more products being funded and built, more creators launching on Secret Network, and more supporters and partners than ever helping to ensure our global growth, the future has never been brighter for Web3 privacy.