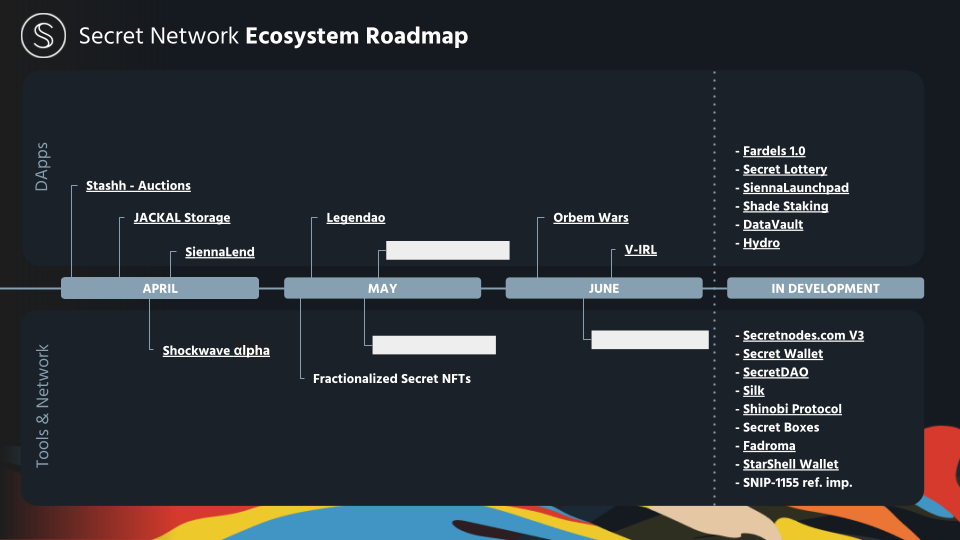 In March, we saw the launch of two new liquid staking DApps, StakeEasy and stkd - SCRT. Liquid staking allows you to stake $SCRT whilst keeping your investment liquid in the form of a derivative token that can be used in DeFi. Additionally, two of the network’s biggest DApps released new features. ALTER launched their privacy-preserving chats in late March, and Stashh launched its auction module in early April. Finally, Domerium Labs launched the public Orbem Wars alpha, and organized the first P2E gaming event on the network.

Looking ahead to April and beyond, we see five newcomers to the roadmap:

JACKAL is planning to release their storage feature in April. Development on Fractionalized Secret NFTs is moving along and scheduled for May. Legendao, which recently announced the release of ‘Killroy Was Here’ on its platform, is expected to launch in May. Finally, Shockwave αlpha, the core protocol update, will significantly boost the processing performance of the network, and is planned for late April. Keep an eye on the announcements on Discord and Twitter to get more updates during the month!

A couple of project highlights to look forward to in the coming months.

Legendao is an NFT Mint Lab designed to attract legendary talent. Using avatars and gamification, they create an immersive experience for collectors. Its $LGND token and DAO will play a key role on the platform.

Hydro is a new DeFi protocol. It aims to unlock the largest amount of liquidity in Cosmos by bringing innovative DeFi initiatives.

As developers, development companies, and as a community, we will never stop building. There are countless use-cases, unique to Secret Network, left to explore. Keep following the official announcements channels (like Discord and Twitter) and the Secret Blog to stay up-to-date with the latest secrets as they are revealed…

The release of the April Secret Network Ecosystem Roadmap follows our reveal of Shockwave in early January of 2022. With more products being funded and built, more creators launching on Secret Network, and more supporters and partners than ever helping to ensure our global growth, the future has never been brighter for Web3 privacy.