The Secret Monero Bridge has launched on mainnet! Learn how to use the Secret XMR Bridge to move assets between the Secret and Monero ecosystems and start using Secret DeFi. 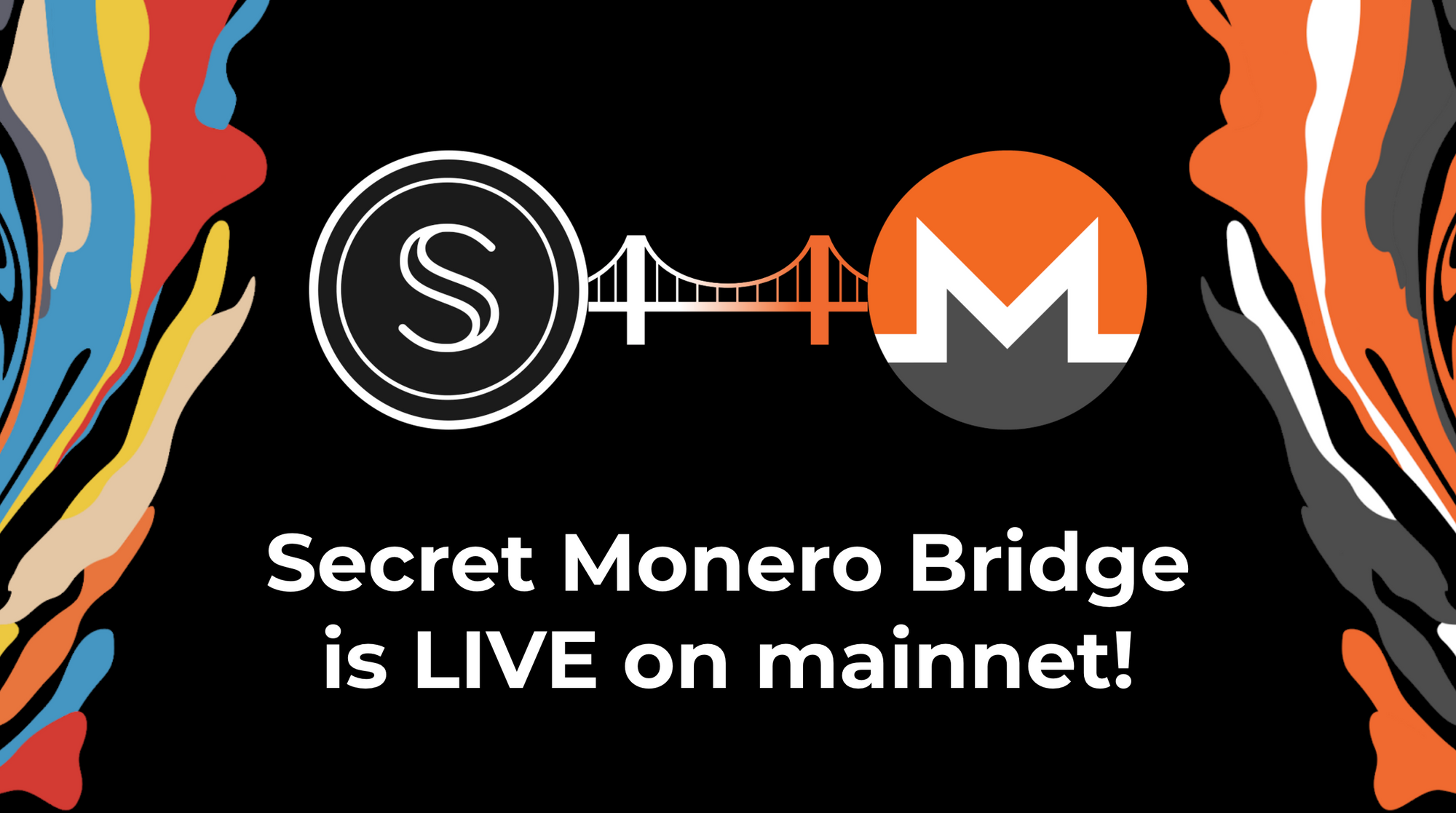 Today we are excited to announce the launch of the Secret Monero / XMR Bridge on mainnet, empowering Monero holders to directly access the Secret DeFi ecosystem for the very first time!

This combines the strength and adoption of Monero with the wide utility of Secret Network’s programmable privacy, creating DeFi utility in ways that have never been possible before.

By using the Secret Monero Bridge, users can:

The Secret Monero Bridge is bidirectional, meaning users can seamlessly convert their sXMR back to XMR whenever they please.

How to get started

What is the Secret Monero Bridge?

Secret Bridges bring programmable privacy to assets from other ecosystems, allowing them to enter Secret Network as privacy-preserving "Secret Tokens." Secret Tokens are programmable like ERC-20s and usable in applications, but they remain private by default like Monero. Interactions with Secret Token contracts are encrypted and only viewable to address owners or holders of their viewing keys.

The launch of the Secret XMR Bridge allows Monero to flow to and from Secret Network. Since Monero is already a privacy coin, the biggest immediate benefit for users is that they gain access to Secret DeFi via privacy-preserving decentralized finance apps built on Secret Network. This includes SiennaSwap, a front-running resistant, cross-chain, and privacy-first AMM.

The Secret Monero Bridge is the third Secret Bridge to launch on mainnet, joining the Secret Ethereum Bridge and the Secret Binance Smart Chain Bridge. As more bridges get added to mainnet, Secret DeFi users will have a wider array of Secret Tokens to interact with, securing Secret Network as the data privacy hub of the blockchain universe!

Secret Network’s vision is to give users privacy by default with the option to decrypt their transactions and data if needed. This gives users granular control over their level of data privacy.

One way to do this is the use of viewing keys. Users that bridge from XMR to sXMR will be prompted to create a viewing key so they can view their sXMR balance and interact with Secret DeFi apps.

Like everything else on Secret Network, creating a viewing key costs SCRT as gas. If you need a small amount of initial SCRT to generate a viewing key, you can:

How does the Secret Monero Bridge Work?

The Secret Monero Bridge uses the I2P network (a fully encrypted private network layer) to provide anonymity and financial privacy for the on/off ramp between the Monero blockchain and Secret Network. The I2P network is an end-to-end encrypted, peer-to-peer, anonymous network where network traffic destination, origination, and contents are kept entirely private.

The Secret XMR Bridge team created the bridge to be an unstoppable and uncensorable service that is decentralized with its architecture. To mitigate censorship risk, the Secret Monero Bridge multi-signature Monero wallet was designed as a multi-signature wallet, where each decentralized multi-signature consensus node operator (MSCNO) is unaware of the identities or locations of other MSCNOs. Each decentralized MSCNO operates inside the I2P network and therefore remains hidden from others. The Secret Monero Bridge code resides and executes inside the I2P network, protecting the location of the MSCNOs that execute the code.

One of the big benefits of the Secret Monero Bridge is that Monero users now gain access to Secret DeFi apps! This includes:

Go to our DApps page to view all apps you can start using on Secret Network!

As mentioned above, the Secret Monero Bridge is now live on mainnet! At this time, anyone will be able to exchange and yield farm with sXMR, and burn them to transfer back to Monero. For users who are already familiar with DeFi and liquidity mining, this is an attractive new way to get competitive yield on Monero assets while also gaining exposure to the groundbreaking world of Secret DeFi—a universe where applications are front-running resistant and private by design!

In order to learn more about or contribute to the Secret Network ecosystem:

And remember to use the #🌉bridge-support channel on our Discord server for any problems encountered on the Secret XMR Bridge!

Secret Network is community-governed and directly supported by dozens of independent companies, node operators, and developers around the world. Want to get involved as well? Become a Secret Agent!

Thanks for reading to the end! We're excited our privacy solutions have finally extended to the Monero ecosystem as we work to grow a more secure, more accessible, and more usable global open financial ecosystem. As we continue to bring the power of programmable privacy to more ecosystems and assets, we hope you will join us in our mission of empowering and protecting millions of users around the world.