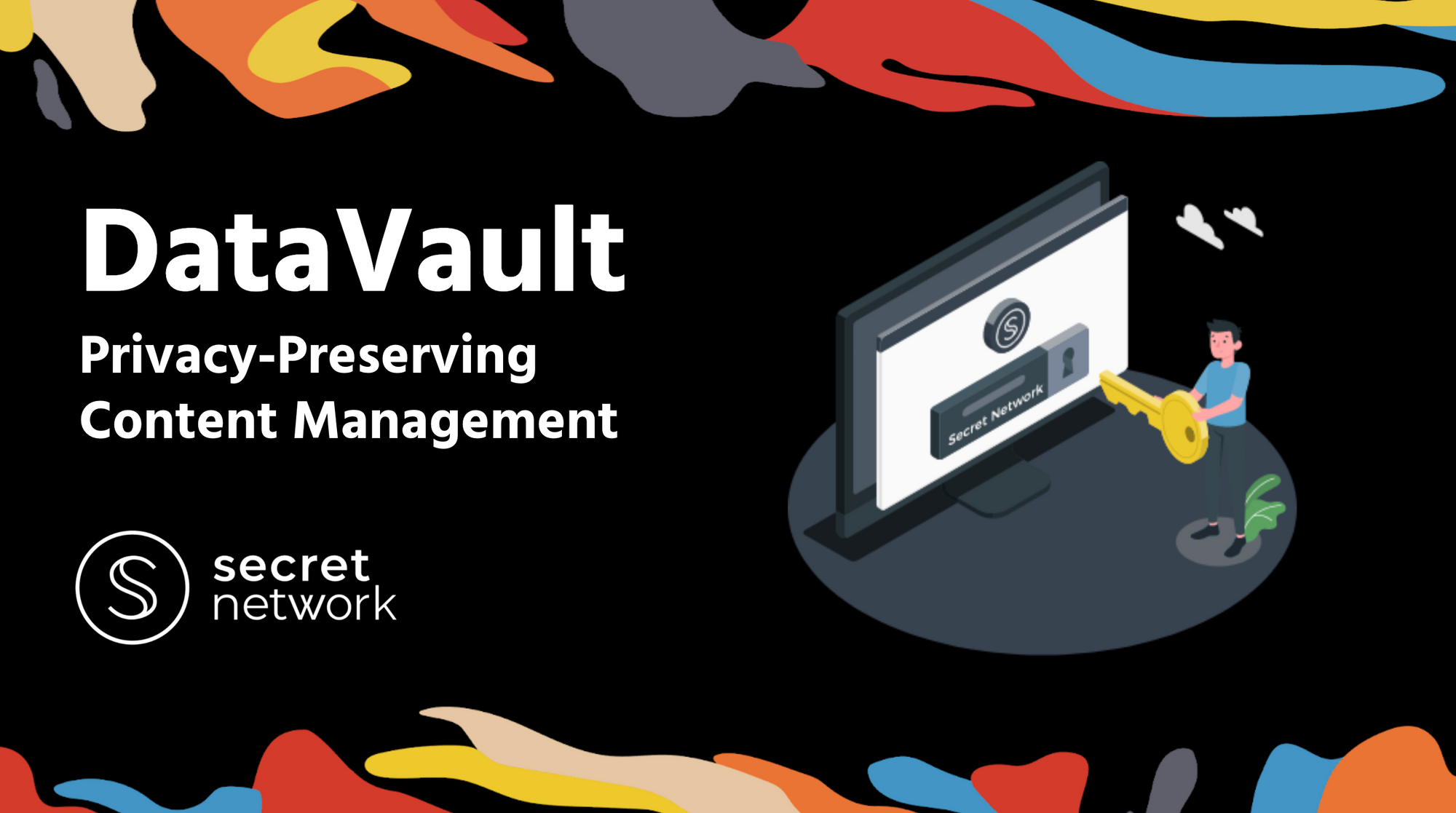 Hello to the Secret community! Today we're excited to feature a new protocol and Secret App on our blog: DataVault & Secret Bazaar. Like most products built on Secret Network, DataVault is only possible by building upon Secret's privacy-preserving smart contract platform. Read on to learn more about this groundbreaking product and the new Web3 use cases it can unlock.

Key to the design of DataVault applications is the ease of uploading data, purchasing access to the data, as well as disputing the integrity of the underlying data. YouTube, Periscope, Theta, Xbox Game Pass, and Provenance are all conceivable use cases that could be partnered with or replicated using a decentralized and privacy-preserving equivalent. This would be powered by the DataVault contract and the ecosystem of DataVault-based applications secured by Secret Network.

Encrypted datasets that are downloaded by consumers can contain unique metadata that is publicly viewable by the consumer. This metadata can consist of videos, screenshots, data proofs, trials, demos, limited software versions, low-resolution images, trailers - anything that would entice the consumer to purchase the viewing key that unlocks the full access to the encrypted dataset they have downloaded.

Additionally, this publicly visible metadata can interact with the front-end application representing a specific dataset attached to DataVault. What exists within the metadata of the downloaded encrypted dataset is only limited by the creativity of the publisher. Using the power of Secret Network as it pertains to public and private metadata, content creators can create powerful applications and products that directly leverage the power of Secret Network.

Now, let's go further into the weeds to see how DataVault can solve some thorny issues with content management and data marketplaces...

If the dataset is properly disputed, the consumer will receive a refund and a percentage of collateral committed in advance by the publisher is forfeited to the curator upon dispute resolution - this is to encourage procedural care with participation with the DataVault protocol. While initial design for curators and DataVault involves a degree of centralization to be able to rapidly and decisively respond to disputes, eventually curator addresses will be directly attached to token ownership with room for more individualized dispute design on a case-by-case application level. There are a maximum number of disputes possible defined by DataVault governance. Upon official reviews, individual datasets will no longer be subject to review - at which point the seller can delist it themselves. Additionally, publishers can request verification by curators in advance. The costs to do so are in the form of the native DataVault token.

It is important with any data marketplace protocol to be able to establish a quantified reputation system that can guide consumers with their purchasing decision as well as incentivize publishers with their execution. There are three different score mechanics that are leveraged: item, publisher, and consumer. Item scoring is based on the feedback of users - what is the quality of the dataset? Does it meet users’ expectations? Was it in alignment with what was advertised in the encrypted dataset metadata? Publisher scoring is weighted based on the average item’s sold rating, price, volume, and dispute encounters. The more a publisher’s dataset is purchased in terms of volume, price,  and rating, the higher the score. In this way, publishers are differentiated by the quality of the datasets they generate, as well as the demand users have for said data. Consumers have a simple price-weighted score based on the volume of purchases, and the amounts. In this way, highly active consumers can be differentiated, as well as the weight of their opinion of any given dataset.

To enable maximum adoption, DataVault is designed for easy front-end integration with DataVault’s secret contracts such that any team and entity can have a focused site on a specific type of dataset hosted via DataVault. This could be an application focused on using DataVault as a music library with purchasable songs, for software distribution, for sports picks, for permissioned videos, paid newsletters, and so on.

Individual marketplace owners will be on a list of accepted addresses that can earn revenue on the contract itself by staking DAVA. Transactions that interact with these front-ends and their respective pre-defined datasets allow for commissions from the sales on the data marketplace to easily be distributed to all of the DAVA stakers attached to the respective secret contract. Owner addresses can also place an emphasis on fees being paid in DAVA, which can be used for staking and earning passive revenue from the whole of DataVault’s marketplaces.

Sites that plug into the modularity of DataVault are hosted on IPFS. This enables one-click button uploading for publishers. The handing off of the dataset to IPFS can be done via Infura, Pinata, etc. As a result of the intentional design choice to have no off-chain data storage, all transaction history and state are recorded. For consumers, their interactions with the IPFS dataset are bounded by the encryption provided by Secret Network, allowing them to interact with datasets with anonymity. Updating datasets is up to individual site owners; this includes any API interactions or third party usage as it pertains to IPFS database updates, registration of items, on chain management of commission distribution, management of content additions or subtractions from a dataset, as well as management of disputes.

Now for some secret alpha!

Secret Bazaar is the first proof of concept product built on-top of DataVault secret contracts. Secret Bazaar is a decentralized data marketplace that allows users to buy and sell any kinds of data. Specifically, there will be a focus on videos and entertainment content. With the plug-in-play capability of DataVault, any sort of front-end application can be plugged in directly to DataVault!

As applications get built into DataVault, revenue streams will be partially redirected to DAVA (the governance token of DataVault) token holders. With the creator/consumer economy, creators will be able to rapidly sell content to the larger public (defining their own commission rates), while having the opportunity to be part of the larger DAVA ecosystem. Imagine if the revenue streams of Netflix, Spotify, and YouTube were all united under a single decentralized token economy and experience? One that favors creators and consumers?

This is the dream of DataVault and Secret Bazaar - the future of consumer economies, powered by Secret Network.

The DataVault community invites you to join their telegram and follow DataVault to stay up to date with the roadmap and announcements!