June saw the launch of the Secret BSC bridge on mainnet, the announcement of the Secret Terra Bridge, the release of $CSHBK on SecretSwap, and much more! 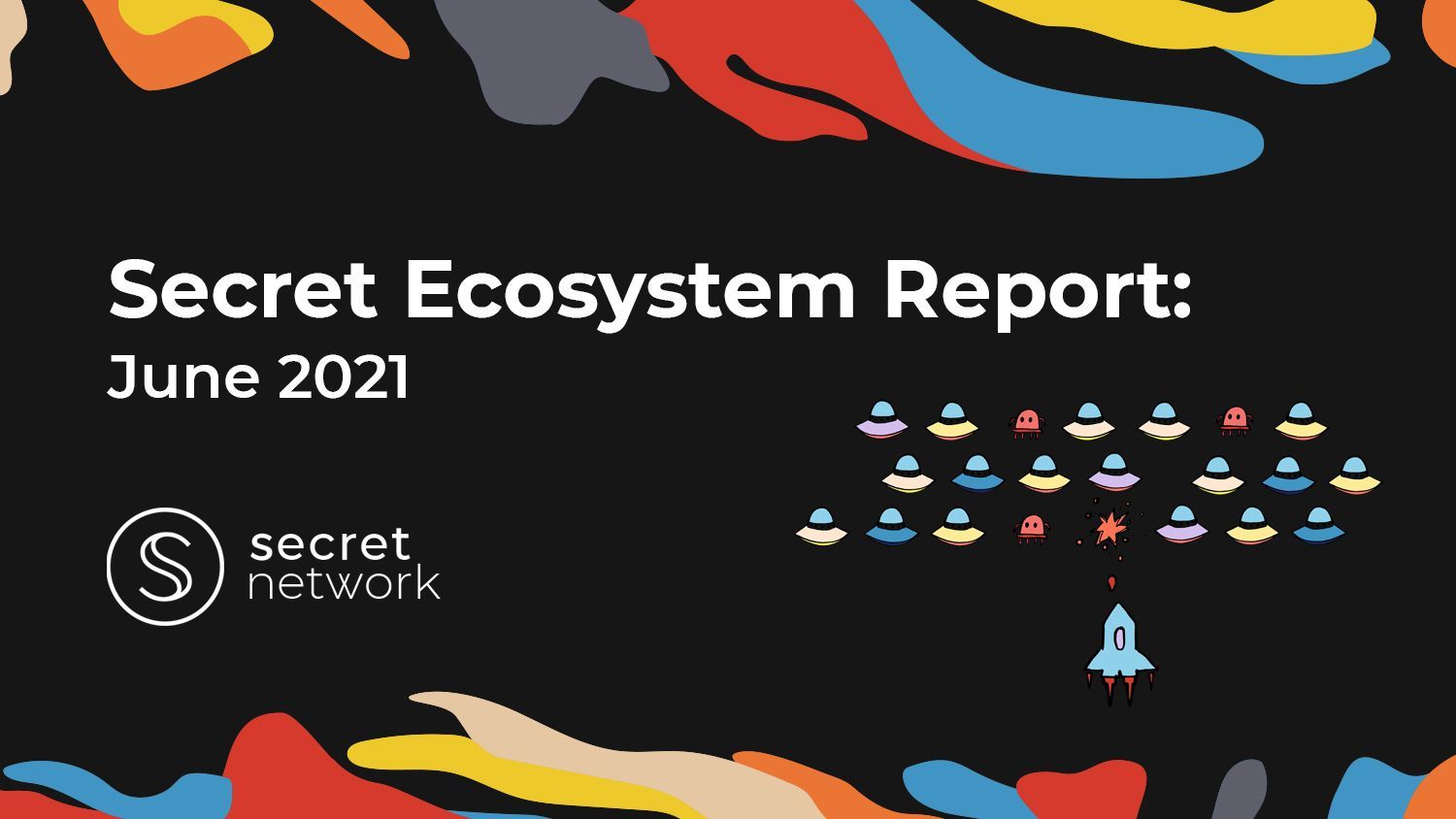 Announcement of the Secret Terra Bridge on testnet. The mainnet launch of the Secret Binance Smart Chain Bridge. The release of $CSHBK on SecretSwap. BitMart listing. The start of the SecretSwap Development Fund.  Newscrypto.io and Secret Network partnership. Tor Bair of the Secret Foundation on the Sommelier AMA with Zaki Manian. Altcoinbuzz BSC media coverage. A Secret NFT Developer Workshop.

Our push to bring privacy to public blockchains is increasingly becoming a reality. See what’s been done - and how you can get involved!

Terra and Secret have long shared a vision for unlocking the true power and value of decentralized finance by empowering communities globally with cutting edge technology in both the privacy and DeFi domain. Both Secret and Terra are built with CosmWasm, smart contracts on both networks use Rust, and both are part of the larger Cosmos ecosystem. It is these commonalities that have led to the current mutually beneficial teamwork between Secret and Terra that has lead to the creation of the Secret Terra Bridge (currently on testnet).

The Secret Terra Bridge testnet joins a list of Secret bridges that have been built or are in the process of getting fully launched. Since December 2020, Secret Network has launched multiple bridges on both mainnet and testnet: the Secret Ethereum Bridge, Binance Smart Chain, Monero, and Plasm. Partnering with Terra on the creation of the Secret Terra Bridge will allow holders of certain Terra assets to create "secret," privacy-preserving versions of their assets as Secret Tokens. Secret Tokens are a powerful concept - they're programmable like ERC-20s and usable in applications, but they remain private by default like Monero and similar coins. They can represent any asset, or they can be fully native to Secret Network.

Secret’s initial bridge integration will focus on support for UST and Mirror assets while our teams explore deeper integrations across the Terra and Secret ecosystems. Here's what users can expect initially:

The Secret BSC Bridge is now LIVE on mainnet, doubling the number of supported Secret Tokens! This unlocks transactional privacy and programmable privacy for BSC assets while enabling holders to take advantage of Secret DeFi opportunities.

You can now view and interact with the Secret Binance Smart Chain Bridge at:

Here is the list of initial supported BEP20 tokens:

The following yield opportunities across Secret DeFi are immediately accessible to the BSC community:

For now, check out the earn pools at: https://app.secretswap.io/earn

Want to use the BSC bridge? Use the following helpful video tutorial!

Read the blog post outlining the launch of the Secret BSC bridge on mainnet.

Since the initial launch of SecretSwap, developers have been hard at work creating the next big feature for SecretSwap: an incentivized cashback token called $CSHBK that is earned via trading on SecretSwap which can then be burned to receive $SEFI. The purpose of the $CSHBK token is to act as a mechanism to incentivize an increase in trading and volume on SecretSwap. The more you trade, the more $CSHBK you earn! The amount of $CSHBK received for trading on SecretSwap is proportional to the volume of the swap.

Cashback is live at: https://app.secretswap.io/cashback

Currently the development fund is accruing a $SEFI balance at the following Secret address: secret1j8ephume52cjxswjvj5y6pvdshfsdhp3p2cjfs

With over $1,000,000,000 in daily volume, BitMart is the 4th most trusted exchange via CoinGecko ratings. Additionally, BitMart is one of the cryptocurrency exchanges serving US users.

Non-fungible tokens have been a focus for the Secret ecosystem from the very beginning. SNIP-20s (fungible Secret Tokens) already power the rapidly growing Secret DeFi ecosystem, allowing users to turn assets from other blockchains into privacy-preserving versions that can be used across Secret's universe of composable, front-running resistant DeFi applications.

The importance of programmable privacy for NFTs is just as strong as - if not stronger than - the importance of programmable privacy for DeFi. The improvements to usability and security are massive, benefitting both users and creators. Similarly to how SNIP-20s unlocked new types of DeFi applications built on and secured by Secret Network (such as SecretSwap), Secret NFTs unlock new and exciting possibilities for Secret Apps that will leverage this powerful primitive.

Learn about the design and structure of secretNFTs, and how you can begin developing them.

Deploy your own secret NFT today!

Secret Heroes launched early May this year as the first fully on-chain game on Secret Network. Secret Heroes had a phenomenal launch in regards of player count and gas usage (only bested by the $SEFI launch so far).

The aim of this approved grant is twofold. First, it will allow the team to keep supporting the game in its current state. This comes down to fix cost for running the frontend and backend to connect to the network. Second, this grant includes a roadmap for Secret Heroes as a game. This includes additional interesting game mechanics, opens the ecosystem to other game developers,  and adds utility to Secret Heroes NFTs.

Read more in the grant proposal linked below.

Currently, Secret Network does not have a python interface available for developers. Having a python interface makes data workflow easier and will help attract a wider range of developers to Secret Network. The current workaround with not having a python library is to use a combination of REST API requests + secretcli + secretJS subprocesses in Python. This is hard to maintain, has poor error handling, and leads to convoluted workflows. The Secret Network developer community looks forward to the full release and development of SecretPY!

Open source web app that will:

Tor Bair, CEO of the Secret Foundation was the first guest ever on Staking Rewards Staking Mondays - a podcast focused on sharing specific knowledge from staking industry leaders. Specifically, this week was focused on Secret Network.

Terra Bites featured a groundbreaking cross-community interview with Tor Bair from Secret Foundation (SCRT) onto Terra Bites to talk about recent and upcoming integrations between the two communities and beyond.

This episode featured the following topics:

🌉 Bridging UST and other Terra Money assets to Secret DeFi

⚛️ The Cosmos internet of blockchains and the exploding network effects resulting

NewsCrypto was proud to announce a partnership with Secret Network, the first protocol to enable not just transactional privacy (i.e. having your token balances and transactions hidden), but also computational privacy by default (i.e. executing smart contracts in an encrypted computational environment, but with all the verifiability that comes with blockchains).

Curious about why you should be a liquidity provider on Secret Network?🤔

Come learn more about Secret, Cosmos Chains, Bridges, and DeFi on the Sommelier AMA with the CEO of the Secret Foundation (Tor Bair) and the Co-Founder of Iqlusion and Sommelier Finance (Zaki Manian) -  hosted by Taariq Lewis!

In this AMA with Secret Network and Sentinel, learn about the underlying tech-stack of Sentinel, what the Secret Network ecosystem is working on building, and how privacy is going to be playing a key role in Web 3.

June saw two different proposals (38, 40) pass on chain. These proposals included funding for the Education Committee as well as the Awareness Committee.

Here are a couple of committee highlights:

Infrastructure committee has made progress on VPS compliance research and testing.

What a summary! There was almost too much progress to document. But as exciting as June was, July promises to bring even more growth to the Secret ecosystem with the rapid development of more DeFi applications and privacy-preserving Secret Apps.

With the announcement of the Secret Terra bridge, the launch of the Secret BSC bridge, and the introduction of $CSHBK on SecretSwap, we've seen massive growth in just a short time. So what other announcements and collaborations lie in store (when IBC)? You’ll have to wait and see what secrets July brings…