August saw the announcement of Supernova - the first major mainnet upgrade since the launch of Secret Contracts in September 2020, bringing IBC compatibility and more. Plus: Secret Monero Bridge on mainnet, Band Protocol Integration, another Secret Grant, and much more! 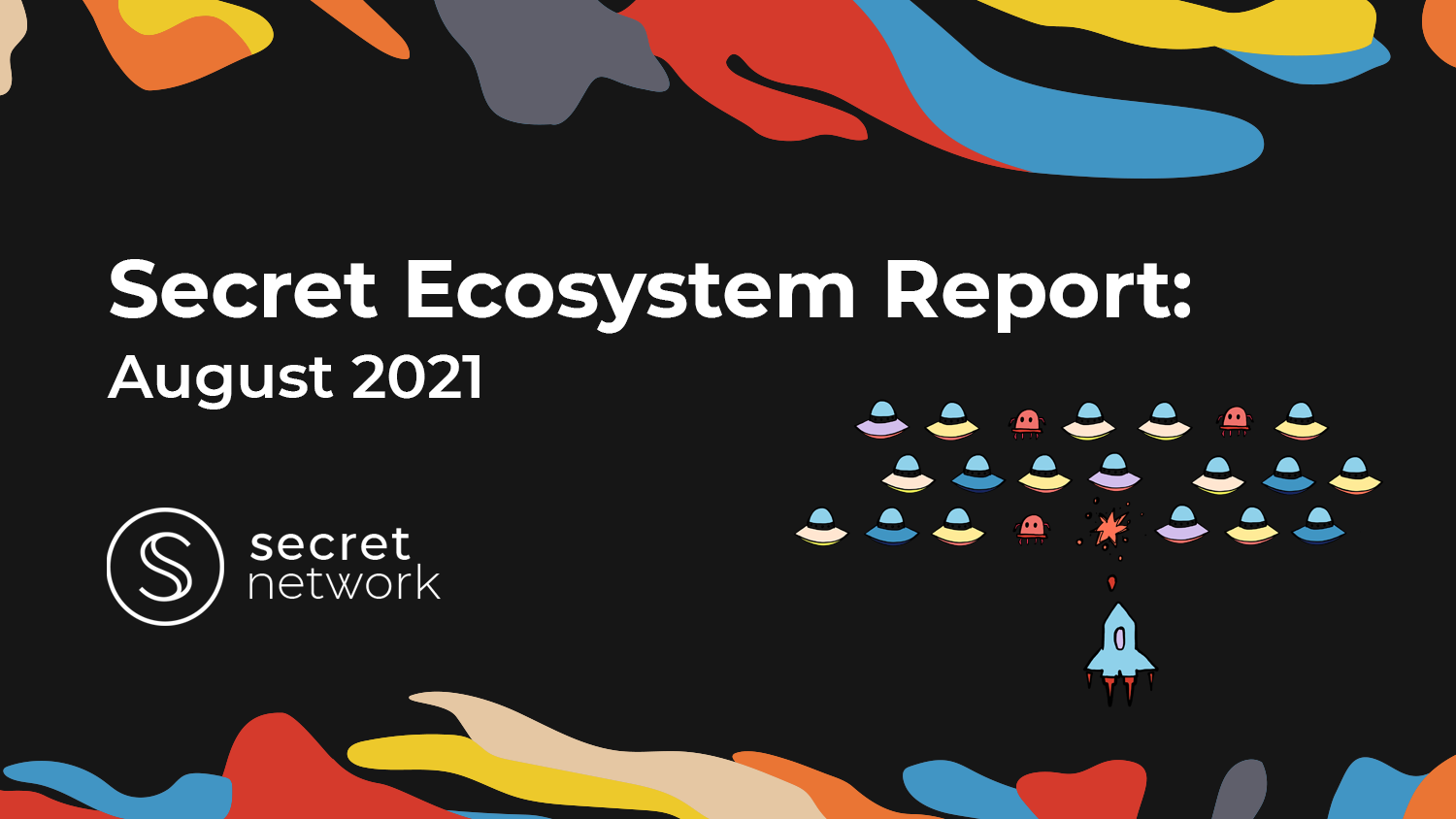 Since becoming the first Layer 1 blockchain with privacy-preserving smart contracts in September 2020, our push to bring privacy to all public blockchains has become closer to reality. See what’s been done lately - and how you can get involved!

Supernova: An Explosive Vision for the Future of Secret Network

It’s been one year since Secret Network pioneered private smart contracts. Now it’s finally time to take another explosive step forward with Supernova - a major network upgrade that establishes Secret Network as the cross-chain privacy-first platform for Web3, enabling hundreds of new unique use cases for DeFi, NFTs, and beyond. We’ve already signaled the Supernova upgrade on-chain, and the proposal has passed unanimously (with over 60M SCRT in voting power)!

Supernova introduces our IBC integration, finally connecting Secret Network with blockchains across the Cosmos ecosystem (in addition to our bridges to Ethereum, BSC, Monero, Terra, Polkadot, and more!). IBC allows SCRT to be used in cross-chain Cosmos applications (such as Osmosis & Gravity DEX) and provides privacy features to the entire Cosmos ecosystem. This further cements our position as the data privacy hub for the decentralized web and unlocks our next phases of growth and adoption.

Since the announcement of Supernova in mid-August, the core development team has already completed Milestone #1 objectives. Milestone #1 consisted of the following tasks:

With the successful completion of Milestone #1, the core development team has officially released the Supernova public testnet. This is a key step for empowering node-runners/validators and developers to experiment with the new features, set-ups, and interfaces that are made possible by Supernova. A range of Secret Applications and their respective developers are excited to use the new functionality enabled by the public testnet; stay tuned to learn more about the amazing use cases and products on the way.

Beyond IBC, Supernova will also introduce a number of major network improvements, including additional modules that should greatly simplify network upgrades and workflows for companies that want to integrate Secret Network seamlessly in consumer-oriented applications. We’ll also add support for interchain accounts and bring new CosmWasm improvements to our runtime. Alongside the Supernova upgrade will come new Secret applications launching on mainnet, new partners and collaborators, and millions of new possibilities for users and developers.

It is now time to explore the next frontier.

Combining the strength and adoption of Monero with the wide utility of Secret Network’s programmable privacy, the Secret Monero Bridge is connecting privacy-to-privacy, creating DeFi utility in ways that have never before been possible before.

By using the Secret Monero Bridge, users can convert their XMR into sXMR, a "secret" version of XMR native to Secret Network. Monero users can then use Secret DeFi applications like SecretSwap to exchange sXMR privately for a variety of Secret Tokens (either native or supported by other Secret Network bridges), or for SCRT itself! The Secret Monero Bridge is bidirectional, meaning users can seamlessly convert their sXMR back to XMR whenever they please.

Use the Secret Monero Bridge now at this IPFS link.

Learn how you can start using the bridge now:

You can also find an extensive FAQ on the Secret Monero Bridge.

The launch of the Secret Monero Bridge allows Monero to flow to and from Secret Network. Since Monero is already a privacy coin, the biggest immediate benefit for users with this bridge is that they can gain accessibility to Secret DeFi via privacy-preserving decentralized finance apps built on the Secret Network. This includes SecretSwap, the first front-running resistant, cross-chain and privacy-first AMM.

The Secret Monero Bridge is the third Secret Bridge to launch on mainnet, joining the Secret Ethereum Bridge and the Secret Binance Smart Chain Bridge. As more bridges get added to mainnet, Secret DeFi users will have a wider array of Secret Tokens to interact with, securing Secret Network as the data privacy hub of the blockchain universe!

sXMR holders will have the following DeFi opportunities on SecretSwap:

Secret Network has completed the implementation of Band Protocol to bring decentralized and scalable cross-chain oracles to Secret Network - with documentation and the oracle price feed being officially live on mainnet.

Band Protocol supports unrestricted access to 175+ price feeds, empowering the next generation of Secret DeFi dApps and tools by connecting trusted off-chain data from institutional providers, directly to Secret Network. Specifically, there is oracle support for foreign exchange rates (22), commodities (2), and cryptocurrencies (199). With the implementation of Band oracles, Secret Apps built on Secret Network will be empowered to use a wider range of decentralized price sources, creating even better and more powerful use cases with secret contracts.

The utilization of Band Protocol enables secret contracts to have access to data sources outside of the Secret Network protocol. This will be critical for the development of Secret Apps that are focused on data marketplaces, credit scoring, lending, insurance, synthetic assets, derivatives, stablecoins, staking derivatives, and DEXs (such as SecretSwap).  All of this is made possible via Band Protocol’s cross-chain data oracle network on BandChain - a highly secure and scalable blockchain for off-chain sourcing, aggregation and reporting.

In August, Secret Network and keyTango unveiled Duplex: a new program and product designed to deliver unprecedented yield on stablecoins via a cross-chain, multilayer strategy.

The first Duplex pilot is focused on $UST, part of the Terra stablecoin ecosystem! Come be part of this exciting invite-only pilot and glimpse the future of stablecoin yield.

Altermail is also a recipient of a grant given by the European Institute of Innovation & Technology.

The Enigma development team launched a small application called the viewing key wizard, empowering users to create a larger number of viewing keys all at once before having to interact with any front-end applications on Secret Network. Check it out now!

In August, BitMart officially integrated the Secret mainnet onto its platform - unlocking access and liquidity to even more users. Learn more about the other exchanges that can be used to acquire SCRT!

Come check out the Secret Network Supercut with CEO of the Secret Foundation, Tor Bair. In this mashup, a range of interview highlights cover Secret Network and the important role it will play as the data privacy platform of Web3!

0:06 -  Why is it called Secret Network- Tor speaks at Crypto Mondays in Puerto Rico

2:33 -  Private by Default and the Toothpaste Analogy - Tor on Blockchain Brad’s Podcast

3:26 -  Hashoshi on the Future of Secret Network

August saw the ratification of the Governance Committee, which exists to promote transparent collaboration within the network and provide neutral discussions on proposals, voting, and governance issues. This committee works closely together with validators and other committees to ensure optimal support for the overarching Secret Network goals. It is vital to provide a space where thoughts and ideas can freely and respectfully be exchanged by anyone within the Secret Network to aid in reaching informed consensus on-chain.

The Governance Committee charter and full proposal can be found here:

August also saw the ratification of proposal 45, which decreases the on-chain parameter controlling the Secret Foundation Tax module from 15% to 10%.

“While nothing is certain in technology, the future of privacy DeFi looks to be of huge importance to how finance blockchains prosper.”-Paulo Guida

The community has created a Secret Agent Twitter list for any and all Secret Agents that represent the iconic Secret 𝕊 in their their profile description or username. Be sure to add 𝕊 to your profile and join the growing community of Secret Agents on twitter!

In episode #4, Assaf joins the show and shares what it's like to work as a Developer for Enigma MPC, the core development contributors for the Secret Network. There is discussion of future versions of Secret Swap, viewing keys, and random number generators.

In episode #5, Ian Dixon joins the show and discusses the technical infrastructure of Secret Network, and explains what Secret Nodes is building. We talk about the Secret Wallet being developed, the potential for Ellipsis Protocol, the ENG to SCRT Swap, and explore the possibilities of IBC and the new generation of Intel SGX.

In episode #6, Max Koda joins the show and explains the first iteration of the Secret Monero Bridge he built. He talks about his crypto history which predates Bitcoin, the Invisible Internet Project (I2P), and what future iterations of the bridge will look like.

In episode #7, Jeremy and Dalton join the show and explain their efforts in growing Secret Network communities across the globe with the International Growth Committee that they started and lead. They explain the challenges and methods they utilize, and also tease some of the other projects they're involved in such as Data Vaults and the Secret Bazaar!

Oskars joins the show and explains his dApp Altermail, an email alternative that unlike email provides security and privacy in electronic communications. To learn more about them visit altermail.co and get ready for a product release in the coming weeks!

What a summary! There was almost too much progress to document. But as exciting as August was, September promises to bring even more growth to the Secret ecosystem with the rapid development of more DeFi applications and privacy-preserving Secret Apps.

With the successful completion of Supernova Milestone #1, the launch of the Secret Monero bridge, and with more amazing Secret Applications, we've seen massive growth in just a short time. So what other announcements, collaborations, and roadmaps lie in store? You’ll have to wait and see what secrets September brings…